A new look inside cores of UK AGRs 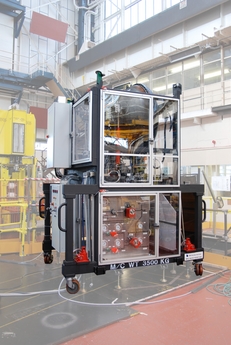 Contractor British Nuclear Solutions (BNS) has provided a new inspection rig to check graphite in UK reactors. Increasing graphite core inspection requirements led to a British Energy review of how to approach the inspection of its AGR reactor channels without extending reactor outages. The requirement had changed from an inspection of a few channels per reactor per year to 20 channels at one of the reactors every six months. In addition, British Energy had just 18 months to implement a solution successfully.

A brainstorming session between British Energy and BNS resulted in a feasibility study being commissioned. Alan Greenaway, British Energy team leader, explained: “We wanted a hybrid of previously successful elements. Cooperating closely with my team, BNS was responsible for the design and its implementation and was able to deliver the solution in 15 months. Even though we deliberately kept this project low risk technologically, concept design to full commissioning in 15 months was a phenomenal achievement.”

The system that allowed British Energy to fulfil the requirement is called NICIE, an acronym for New In-Core Inspection Equipment. With statutory outages being too busy and the requirement not to extend them, the original NICIE is designed to be operable during refuelling outages at Hartlepool and Heysham 1. This is because these stations are refuelled by a single chamber fuelling machine, which provides a window of one and a half hours to carry out the inspection, while a ported plug is left in position in the fuel channel during fuel exchanges.

Wilf Blackwell, technical director at BNS, explained: “Our NICIE system, which was first used in the summer of 2005, consists of a radiation tolerant TRIUMPH camera mounted onto a contained hoist. The camera’s rotate module allows 360-degree rotation and the channel viewing mirror enables sideways viewing for wall inspection. It is controlled by a console located at pilecap level, giving both remote operation and excellent visual feedback. The highest risk element of the design was the umbilical, which was sourced from Habia. The umbilical winds onto a pancake drum hoist that was based on a previously successful BNS-designed manipulator hoist. The entire NICIE system was tested in a replica reactor standpipe at our testing facilities at BNS Leicester.”

In 2007, the requirement for reactor channel inspections at Hinkley Point B was increased to more than 30 channels, for both visual and dimensional inspections. BNS worked with British Energy to enhance the NICIE concept to provide additional functionality. Out of this grew Mk2 NICIE, which incorporates not only a camera, but also a Channel Bore Measuring Unit (CBMU) capable of being deployed through the reactor ported plug. When inserted into the fuel channel, it gives an accurate measurement of the shape and profile of the graphite core. Mk2 NICIE can operate at both stations with single chamber refuelling machines, as well as those with three chamber refuelling machines.

Alan Greenaway commented: “Our first Mk2 NICIE was delivered to Hinkley in September 2008, this machine worked well and carried out both the visual inspections and the requisite measurements within the outage time, overseen by a team of six; three from British Energy and three from BNS. The first unit was used again at Hinkley in June 2009 with equally good results. A second Mk2 NICIE has recently been delivered to Hunterston and it has just completed 18 channels of measurement and inspection during its first outage with no significant problems.”

Mk2 NICIE’s performance has been found to be such a success that British Energy has issued an enquiry for two more to increase the inspection capability at Heysham 2 and Scotland's Torness Power Stations.