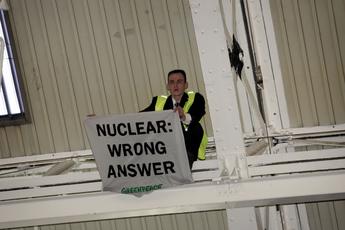 UK prime minister Tony Blair evaded protestors to announce a review of the country's energy situation, which would include the question of ‘facilitating’ new nuclear build.

Moments before Blair took the stage to address the Confederation of British Industry (CBI) conference in London on 29 November, two Greenpeace protestors climbed ceiling rafters to unfurl a banner reading: “Nuclear: wrong answer.” The pair then released hundreds of small stickers with the same message over nonplussed business leaders before the hall was cleared.

The protestors demanded to make a 10 minute statement of their own but were told in no uncertain terms that neither the Blair nor CBI chief Sir Digby Jones would accept ultimatums.

About 45 minutes later, delegates assembled in a side room to hear Blair say: “The issue back on the agenda with a vengeance is energy policy.”

Soon after 2020, Britain will have lost around 20% of generating capacity as Magnox and AGR plants reach the ends of their lives, leaving the Sizewell B PWR as Britain’s only operating nuclear plant. In addition, coal plants accounting for 10% of generation would also have been retired. “Some of this will be replaced by renewables but not all of it can,” said Blair, whose speech also contained warnings about possible natural gas shortages as well as the dangers of over-reliance on any fuel.

Blair announced the establishment of a review of the UK’s progress against the medium- and long-term goals set out in the 2003 energy white paper (such as a 20% reduction in carbon emissions by 2020). Energy minister Malcolm Wicks will head the review, and produce a policy statement in the early summer of 2006. “It will include specifically the issue of whether we facilitate the development of a new generation of nuclear power stations.”

No new legislation is required for new nuclear in the UK, but streamlining the planning appeals process and changing the 'renewables obligation' into a ‘low-carbon obligation’ are two of the ways the government might reduce investor risk and ‘facilitate’ nuclear. Peter Waller, head of the energy industries and technologies unit at the Department of Trade and Industry, has previously said that it is “not impossible” that the market could be tweaked in a way similar to that used to promote renewables.

At about the same time as Wicks’ review is published, the Committee on Radioactive Waste Management will recommend technologies for the long-term management of intermediate- and high-level wastes. The two 2006 reports, combined with this year’s restructuring at BNFL and creation of the Nuclear Decommissioning Authority, should provide a solid platform for a refreshed UK industry.

Referring to the protest, Blair accepted that nuclear power was a controversial topic, but called for an open debate: "What we need is a serious debate, not one conducted by protest or demonstration to stop people expressing their views."

A Greenpeace spokeswoman said: "We are launching the fight back against a new nuclear era in the UK by trying to prevent Tony Blair from giving his planned speech at the conference." Instead, the action made certain that Britain’s energy problems and the prospects for nuclear power were discussed on every newspaper front page.