Two restarts for Bruce Power, but partner Cameco opts out 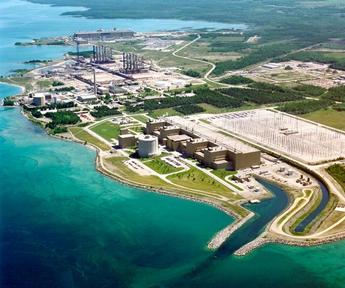 Two power reactors will restart and two more will be refurbished for extended lifespans following an agreement between Bruce Power and the government of the Canadian province of Ontario.

The C$4.25 billion deal will see units 1 and 2 at the Bruce A plant restart and operate for 25 years. Unit 3 at the plant will undergo a refurbishment involving new fuel channels and steam generators while unit 4 will receive new steam generators as required.

The Bruce site hosts eight Candu reactors at two plants, A and B (background and foreground respectively)

The agreement was described by Bruce Power president and CEO Duncan Hawthorn as "transformational" for the company while Ontario's new energy minister, Donna Cansfield, said the move "is another step forward in the McGuinty government's plan to increase Ontario's supply of safe, clean, reliable sources of affordable electricity." She added that the restart and refurbishment strategy would support the government's plans to phase-out coal-fired generation in the energy-hungry region.

Work to restart Bruce A units 1 and 2, both of which are 825MWe Candu units laid up by the former Ontario Hydro in 1997 and 1995 respectively, will begin immediately. An environmental assessment for an expanded Bruce site is already underway - a final report will be submitted to the Canadian Nuclear Safety Commission later this year. Bruce Power said in a statement that it expects unit 2 to return to service in 2009, followed by unit 1 in 2010.

Before the units can return to service, all major life cycle items such as fuel channels and steam generators will be replaced. In addition, all ancillary systems will be upgraded to modern codes and standards. Bruce Power anticipates the total workforce to peak at 1500 over the four-year project.

The reactor retubing contract has been awarded to AECL, the original designer. The contract, assessed at between C$500 million and C$1 billion will take 41 months to complete and involve the replacement of 480 pressure tubes and 480 calandria tubes. Amec will take the roles of project management, contract management and construction management in a C$510 million agreement.

The 16 steam generators necessary for units 1 and 2 will be manufactured by Babcock and Wilcox Canada. Their Alloy 800 construction will reflect advances in technology made since original plant componenets were supplied in the 1970s.

The deal involves a restructuring of the Bruce operation. Bruce Power leases the site from Ontario Power Generation, the state owned utility formed from the former Ontario Hydro, and now a new partnership company has been created, Bruce A limited Partnership (BALP), which in turn leases the Bruce A plant from Bruce Power itself.

During this process, one of Bruce Power's major shareholders, uranium producer Cameco, has renegotiated its interest to avoid investing in the restart and refurbishment project at Bruce A saying the final agreement did not meet its investment criteria.

Cameco confirmed that an agreement had been found with the other BALP partners whereby Cameco would not be a member of the partnership, but would retain its 31.6% interest in Bruce Power, which is responsible for managing the site overall. Cameco retains its full partner status and 31.6% beneficial interest in the Bruce B units.

Cameco will continue to supply uranium concentrates to Bruce B, but will change to acting as fuel procurement manager for Bruce A.

Another Bruce partner, TransCanada, has announced it will invest C$2.1 billion in the project and simultaneously take its stake in BALP to 47.4%. Public service pension fund BPC Generation Infrastructure owns another 47.3%, with the remainder held by unions on the Bruce site.