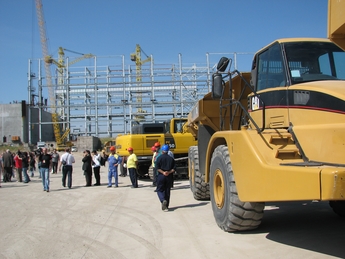 JSC Power Machines and JSC Atomenergoprom have entered into a contract to supply major power generating equipment for units 1 and 2 at Belene NPP in Bulgaria, which are currently under construction. Each unit’s output will be 1060 MW.

The contract stipulates that JSC Power Machines Company will provide design, manufacturing, and supply Belene NPP with two steam turbine sets 1060 MW each, condensers and separate auxiliary equipment for turbine systems and two sets of turbo generators with auxiliary systems equipment, excitation and exciter. The supply is slated for 2011 – 2012.

High-speed steam turbines and turbo generators with output above 1000 MW manufactured by JSC Power Machines Company have shown good results at Tianwan NPP in China, the company said. The design and manufacturing of equipment for the Bulgarian NPP will incorporate new solutions that allow for providing the customer with required power output taking into consideration implementation of turbine pumps.

In 2005 a tender was issued to build Belene NPP won by the Russian CJSC Atomstroyeksport. On 18 January 2008 the contractual agreement for building Belene NPP was signed between CJSC Atomstroyeksport and the National Power Company of Bulgaria in presence of President of the Russian Federation Vladimir Putin and President of Bulgaria Georgy Pyrvanov. The works under the contract cost 3.997bn Euros. The project proposed by JSC Atomstroyexport won the tender due to a higher level of safety, extended lifecycle of major equipment (up to 60 years), and higher capacity factor (up to 90%). The official start of Belene NPP construction was on 3 September 2008. JSC Atomstroyeksport is building a turnkey NPP.