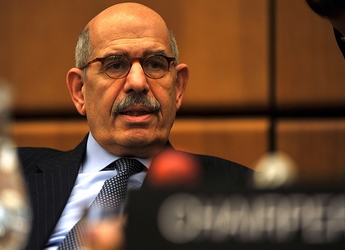 IAEA director general Mohamed ElBaradei has reported on the progress of the IAEA nuclear fuel bank initiative, and outlined what he called his 'ideal scenario' for it, in a speech to the IAEA board of governors in Vienna, Austria on March 2.

ElBaradei said that he has circulated a preliminary proposal from Russia for supplying low-enriched uranium for use of IAEA members that covers assured export licences and long-term costs. He said that a detailed version of the proposal will be published 'in the near future.'

He also said that members had nearly reached the goal of $100m in contributions. US charity the Nuclear Threat Initiative, co-founded by Ted Turner in 2001, has proposed $50m of funding if the IAEA can raise the $100m by September 2009, and if the IAEA chooses to establish a fuel reserve of last resort under its auspices.

An expert advisory panel recommended that the IAEA administer a nuclear fuel bank in 2005.

ElBaradei proposed three principles for how such a fuel bank should be run. First, he said it should be non-political, non-discriminatory and available to all states in compliance with their safeguards obligations. Second, he said that any release of material should be determined by non-political criteria established in advance and applied objectively and consistently. Third, no state should be required to give up its rights under the non-proliferation treaty regarding any parts of the nuclear fuel cycle.

He added, "the next step would be to agree that all new enrichment and reprocessing activities should be placed exclusively under multilateral control, to be followed by agreement to convert all existing facilities from national to multilateral control.

"This is a bold agenda and it is clearly not going to happen overnight. But bold measures, including assurances of nuclear fuel supply and multinationalizing sensitive parts of the nuclear fuel cycle, are vital if we are to enlarge the contribution of atomic energy to peace, health and prosperity throughout the world while curbing the proliferation of nuclear weapons and eliminating them altogether."

ElBaradei summed up the year 2008 as 'somewhat paradoxical' for nuclear power. He said: "It was the first year since 1955 in which not a single new power reactor came on line, but it also saw construction start on no fewer than ten new reactors, the highest number since 1985, the year before the Chernobyl accident."

He added: "Expectations for the use of nuclear power continue to rise. Growth targets for nuclear power were raised in China and the Russian Federation. The ending of restrictions on India´s nuclear trade should allow an acceleration of its planned expansion of nuclear power. Asia remains the focus of growth in nuclear power: of the ten construction starts in 2008, eight were in this region."

He said that the IAEA continues to monitor and verify the shutdown operations of North Korea's Yongbyon reactor, but said that lack of cooperation by Iran has prevented the IAEA from making progress on investigation of possible military dimensions to Iran's nuclear programme.