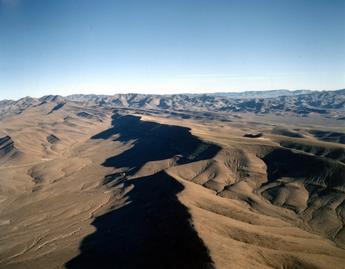 The US Department of Energy (DoE) has submitted an application to build the country’s first long-term geologic spent fuel repository.

The DoE began studying Yucca Mountain as a potential site for a long-term repository for spent fuel and high-level waste in 1978. Three decades on, on 6 June 2008, it filed a construction application with the Nuclear Regulatory Commission (NRC) to build a geologic repository for spent fuel and high-level radioactive waste at the site in the Nevada desert 100 miles northwest of Las Vegas.

The construction licence application runs to 8600 pages backed up by tens of thousands of pages of documentation. The NRC expects the preliminary process of checking over and 'docketing' the application to take until mid autumn, after which work will start on a review including safety analysis and public hearings and expected to involve more than 100 staff and contractors from disciplines including geochemistry, hydrology, climatology, structural geology, volcanology, seismology, health physics, and civil, mechanical, nuclear, mining, materials and geological engineering. The NRC said it anticipates the review to take four years – the statutory three-year review timetable as laid down by the US Congress plus a one-year extension – making construction unlikely to begin before 2013 at the earliest. The US Office for Civilian Radioactive Waste Management (OCRWM), which will be responsible for building and operating the site, currently identifies 31 March 2017 as the best-achievable startup date for receiving spent fuel.

The US Nuclear Waste Policy Act of 1982 made the DoE responsible for finding a site, building and operating a geologic repository for the country’s spent fuel and high-level radioactive waste. Nine potential sites under consideration in 1983 were subsequently narrowed down to three, and in 1987 Congress directed the DoE to pursue only one of them, Yucca Mountain. The final legislative vote approving the development of a repository at the site was passed by the Senate in 2002.

Work started on an Exploratory Studies Facility at Yucca Mountain in 1993 and by 1998 a five-mile main tunnel with several connected research areas off it plus a 1.7-mile cross drift tunnel had been built to enable detailed site characterisation studies to be performed. The OCRWM estimates that about $9 billion has been spent on Yucca Mountain so far, and the cost for the expected lifecycle of the programme (136 years from 1983 to 2119) to be $58 billion.

Despite the 2002 Senate approval of the site, the future construction of a repository at Yucca Mountain is still subject to the vagaries of the prevailing politics. In January 2008 the site was reduced to running on a skeleton staff after the US government decided to cut its budget for the fourth consecutive year. The state of Nevada has long fought against the project, and continues to do so. Only days after the application was filed, Nevada governor Jim Gibbons said in a press release: “We must continue the fight against this ill-conceived project”. Democratic presidential nominee Barak Obama has gone on record as opposing Yucca Mountain on the grounds of its unsuitability as a site. Republican candidate John McCain has not spoken out against the project but said in May that he would be seeking to establish an international repository for spent nuclear fuel that "could make it unnecessary to open the proposed spent nuclear fuel storage facility at Yucca Mountain in Nevada.”