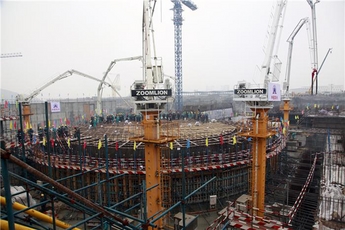 China has got off to a quick start in 2010, with the beginning of construction on its first reactor of the year - Ningde unit 3. Meanwhile, on 21 December the installation of the containment vessel bottom head at Sanmen 1 was completed.

Credit: SNPTC
Installation of the CVHB at Sanmen 1 in December

The first concrete poured for Ningde 3, on 8 January was attended by over 500 people. The Ningde nuclear power plant is being built in China’s western Fujian province by China Guangdong Nuclear Power Engineering Company. The first phase of four CPR1000 reactors are expected to begin commercial operation between 2012 and 2015. Eventually six of the 1000MW domestically designed units will be built at the site.

So far, about 50 billion yuan has been invested in the Ningde project, which is the largest energy investment project in the province. Work is progressing well on units 1&2 that started construction in February and November 2008, respectively. The dome has been lifted and installed at unit 1 and CGNPC says construction is at a peak on unit 2.

Credit: CGNPC
Start of construction at Ningde 3 on 8th January 2010

The CVBH serves as the foundation for the containment vessel, a capsule-shaped steel structure that will house the nuclear reactor. The project team used a large-capacity crane to lift, position and install the CVBH. The lift of the CVBH and its supporting structures was more than 900 tons.

“The successful lift and set of the CVBH brings us one step closer to introducing the world's first AP1000 nuclear power plant,” said Fred Buckman, president of Shaw’s Power Group. “As we continue construction, we remain dedicated to the safe and timely execution of this project.”