TVA board authorises completion of Bellefonte 1 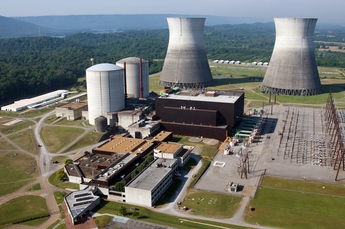 US utility Tennessee Valley Authority has authorised the completion of Bellefonte 1, a 1260 MWe B&W PWR near Scottsboro, Alabama, whose construction was halted in 1988.

The decision, originally expected to be made several months ago, was deferred because of the Fukushima Daiichi disaster. The decision was part of a two-year Integrated Resource Plan, finished in March, that determined that restarting construction was the least-cost option for meeting TVA’s future needs.

TVA said that the project will cost $4.9 billion; $2 billion of that would include new equipment including steam generators, modern control room and digital instrumentation. The project would use existing site assets, including containment, cooling tower and infrastructure.

"As we build Bellefonte we will integrate safety modifications from the extensive review of the lessons learned from the Fukushima nuclear plants in Japan," said Tom Kilgore, TVA president and CEO.

The construction project will require 2,800 construction jobs and 650 permanent staff once the plant is completed; TVA said it would aim to complete the project in the 2018-2020 timeframe.

TVA said that unit 1 is now about 55 percent complete; but it also said that construction was nearly complete when it stopped in 1988, but in the intervening period components were removed, according to media reports.

A 1993 B&W report of a model proposed for Bellefonte, ‘Nuclear Plant Performance Analysis using the Modular Modeling System’ said that unit 1 construction was 75% complete in 1988, and unit 2 50%.

The Bellefonte plants are fitted with the 3620 MW B&W 205 reactor, which TVA admits is not licensed to operate in the USA. However, it says that the design is similar to the B&W 177FA reactor design. US reactors using this design are Oconee 1-3, TMI 1-2, Point Beach 1 and RE Ginna.

At the same time, TVA announced that it is buying the 970 MWe Magnolia combined-cycle gas plant near Ashland, Mississippi from Kelson Energy. It also announced plans to fit smog filters on two fossil-fuel plants, and to increase wholesale electricity rates by 2%.

In 2010, TVA changed the status of Bellefonte 1&2 to ‘deferred’; unit 1’s construction licence was due to expire 1 October 2011; unit 2’s on 1 October 2014. TVA also told the NRC it would give it 120 days’ notice of any construction work. In 2006, TVA withdrew the construction permits, but was authorised to reinstate them in February 2009.

At the time, Eric Leeds, director of the NRC’s Office of Nuclear Reactor Regulation said, “This is just one step in a long list of actions TVA must complete before they resume construction at Bellefonte.”