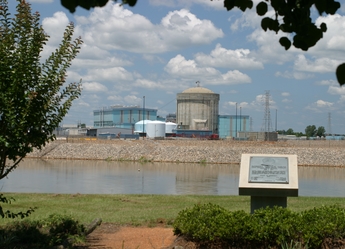 Within six weeks of announcing the first engineering, procurement and construction (EPC) contract in the USA in over 30 years, Westinghouse said on 27 May that it and its partner The Shaw Group have signed another EPC contract with South Carolina Electric & Gas Company (SCE&G), principal subsidiary of Scana, and Santee Cooper, South Carolina’s state-owned electric and water utility, for two AP1000s at the Virgil C Summer nuclear plant.

As is the case for the earlier contract with Southern Company – for two AP1000s at the Vogtle plant – the Summer contract is contingent on the approval of the state’s Public Service Commission (PSC).

While Westinghouse did not disclose the value of the contract, after the announcement of the contract Kevin Marsh, president of SCE&G, said: “We estimate the cost for both units upon completion is approximately $9.8 billion. SCE&G’s share of that total is about $5.4 billion and Santee Cooper’s share is about $4.4 billion.” The price was based on the contract price plus forecasted inflation, owner’s costs (such as site preparation) and contingencies, he said. However, he added: “Each company will also incur costs related to transmission facilities and certain financing costs related to the project.”

At the end of May SCE&G filed a combined application for a certificate of environmental compatibility, public convenience and necessity, and for a baseload review order, with the South Carolina PSC and the South Carolina Office of Regulatory Staff. The application is filed under provisions of the Base Load Review Act (BLRA), a state law enacted in 2007 that allows cost recovery of new units during the course of their construction through adjusting electricity rates. If approved, the application would allow $1.229 billion to be recovered through increasing customers’ electricity bills by an average of 2.49% during the construction period. “Paying financing costs while construction is ongoing, as opposed to waiting until the project has been completed, will lower the cost of the new units by about $1 billion,” said Marsh, adding: “We estimate this reduction will save our customers approximately $4 billion in electric rates over the life of the new units.”

The PSC is required to issue an order within nine months of the filing. If approved, new rates would be effective from March 2009.

SCE&G said new nuclear is competitive with other forms of generation. Marsh claimed: “Our evaluation included coal, natural gas and other forms of generation, including renewables. Bottom line, nuclear is the right choice for our customers in South Carolina.” He added: “The EPC contract is designed to help us minimise the cost of the new units. A significant portion of the contract price is fixed, or fixed with agreed-upon inflation factors. In addition, the ability to construct the new units on our existing nuclear site will lower the cost and minimise the need for new transmission lines.”

At the end of March, SCE&G and Santee Cooper submitted an application with the Nuclear Regulatory Commission (NRC) for a combined construction and operating licence. Following an approximate three-to-four-year review process, the NRC could issue the licence in 2011. SCE&G said that construction would begin shortly thereafter, subject to PSC approval, with an in-service date of 2016 for the first unit, and 2019 for the second.

SCE&G and Santee Cooper are joint owners and share operating costs and generating output of the existing 966MWe Summer unit, in Jenkinsville, South Carolina. A similar arrangement is expected to apply to the two new 1117MWe AP1000 units, with SCE&G accounting for 55% of the cost and output and Santee Cooper the remaining 45%. The plant is operated by SCE&G.

Related ArticlesOblast opportunityExternal weblinksNuclear Engineering International is not responsible for the content of external internet sites.Draft UN Action Plan on Chernobyl to 2016
Post to: