Progress Energy to choose site and vendor before 2006 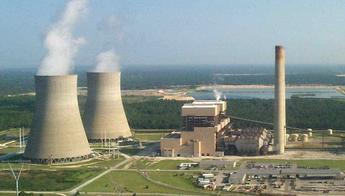 Further small steps were taken towards new nuclear build in the USA on 1 November when Progress Energy announced its intention to apply for two dual-unit combined construction and operating licences (COLs).

The company expects to submit the licence applications complete with environmental studies in early 2008, begin construction in 2010, and have the first of four new reactors under commercial operation in 2015.

No decisions on either siting or reactor designs have been announced, but the company has said that the American states it is considering include North Carolina and South Carolina for one pair of units, and Florida for the other.

Progress part-owns and operates the Brunswick and Harris plants in North Carolina, and Crystal River in Florida. It also wholly owns and operates the HB Robinson plant in South Carolina but Garry Miller, Progress' manager for COL applications, said greenfield sites in those states were also under consideration.

Progress’ announcement to the US Nuclear Regulatory Commission (NRC) also stated that the company expects to have chosen both a site and reactor vendor by the end of 2005. The reactor technology reportedly under consideration is Areva’s US EPR, General Electric’s ESBWR and Westinghouse’s AP1000. Miller said that the same design would be used at both sites, barring specificities, to gain as much as possible from standardisation.

Among the factors listed in a Progress news release as important to the final decision to build – which would come near the end of the decade – would be the availability of a permanent store for spent nuclear fuel.

Related ArticlesIntroducing the US EPR Constellation and Areva join forces on EPR
Post to: