Petten HFR reactor expected to restart in a month 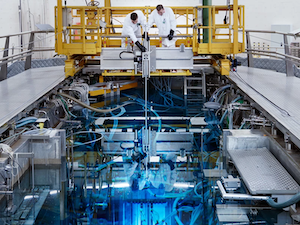 The High Flux Reactor (HFR) project team at NRG in Petten in the Netherlands has provided a further progress update on the reactor’s extended closure.

The cause of the defect, detected during an inspection on 21 January prior to the reactor start, has been identified. The analysis of the underlying cause has been carried out and will be submitted to the Authority for Nuclear Safety and Radiation Protection (ANVS).

The project team is making "good progress" and a solution to restore functionality has been chosen. The plan, including the supporting safety analyses, has been submitted to the ANVS. After approval of the plan by the ANVS, the solution will be implemented, which will restore the cooling system. According to the current reactor schedule, a maintenance period of one month is now planned. NRG said it aims to complete all work within this planned maintenance period.

Nuclear Medicine Europe (NMEU), which represents producers and buyers of medical isotopes, has been informed. The Emergency Response Team (part of the NMEU) has examined whether other reactors can go into operation earlier than the planned date, or whether they can run extra production in order to fill vulnerable moments in the schedule. The Belgian BR2 reactor has started earlier than planned and the MARIA reactor in Poland has also indicated that it will produce extra.

However it is now clear that the HFR will not be able to produce for the entire planned cycle (from 20 January – 20 February 2022). Given the large capacity of the HFR, other reactors are not expected to be able to meet the full demand. This has led to concerns among doctors and hospital pharmacists about the continuity of supply of medical isotopes.

NRG said it carries out an inspection and maintenance programme to ensure the reliability and high utilisation of the HFR for producing medical isotopes and conducting research, now and in the future. NRG does everything it can to prevent problems from occurring in the future.

NRG said the Netherlands' government expects to make a decision about the PALLAS project, which would replace the HFR, by the end of the first quarter of 2022, based on a good understanding of the costs, risks, financing options, revenues and alternatives.

“Since the development of a reactor takes about 10-15 years, a decision about the construction should be made in the short term. The PALLAS project is the most advanced initiative in Europe and could – if the government decide to do so – be operational from 2030 to prevent shortages.”  However, NRG notes: “Experts expect that, if no measures are taken, European production capacity will be phased out.”