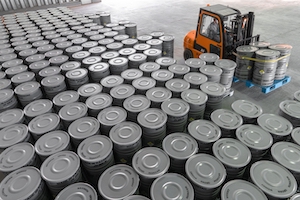 Kazakhstan’s National Atomic Company Kazatomprom announced that its Board of Directors had passed a resolution to participate in a physical uranium fund, ANU Energy OEIC Ltd.

The fund, established at the Astana International Financial Centre (AIFC), will hold physical uranium as a long-term investment with its initial purchases financed through the founders’ round of investment totalling $50 million. The investment is being sourced from Kazatomprom at 48.5%, National Investment Corporation of the National Bank of Kazakhstan (NIC) at 48.5%, and Genchi Global Limited (the Fund Manager) at 3%.

Once the Fund is operating, a second stage of development is expected to be carried out through an additional public or private offering, with the timing and details to be determined by market conditions. At the second stage, the Fund is expected to raise capital of up to $500 million from institutional and/or private investors, with the proceeds to be used for additional uranium purchases.

“The establishment of ANU Energy is a project that has been in development for almost four years as part of Kazatomprom’s broader value-focused strategy, and the Fund will be operating in an environment of tightening supply, driving positive benefits for its stakeholders.”

The accelerated global transition towards clean energy, including nuclear power with its inherent climate and low-carbon benefits, provides a strong investment thesis for the uranium industry. However, despite growing interest from a number of international- and regional-focused investors over the past several years, opportunities to gain exposure to the commodity have been limited to two uranium funds – one trading publicly on the Toronto Stock Exchange in Canada and a second listed on the AIM Exchange in London.

ANU Energy, being established through the AIFC in Kazakhstan, will be the first uranium fund providing potential direct access for emerging market investors. Kzaomprom said ANU Energy will be an independent entity governed by a qualified board of directors to ensure the volumes held by the Fund are managed responsibly.

Photo: Kazakhstan has passed a resolution to set up a physical uranium fund (Photo credit: Kazatomprom)