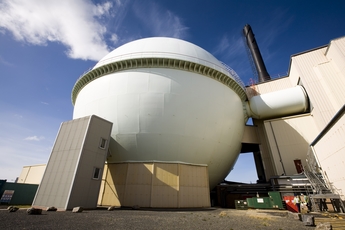 The operators of the Dounreay nuclear plant in northern Scotland have received planning permission for two waste stores, vital to decommissioning the remote site.

With a combined value in excess of £300 million and a capacity for almost 200,000 cubic metres of waste, they will be the largest facilities ever built in Scotland for managing radioactive waste.

Solid and liquid intermediate-level radioactive waste will be processed in a new treatment plant known as D3900, where it will be mixed with cement and set inside drums and crates. Once set, the containers will be moved to an adjoining storage area.

The Scottish Government’s policy on nuclear waste is that it should be stored near-site and near-surface.

Tony Trayner, head of construction at DSRL, said: “An essential element of any decommissioning project is being able to deal with the radioactive waste that it generates and these new facilities will give us that capacity through to the end of our programme.”

Highland Council granted outline consent for the new facility in January 2007. Detailed plans were lodged with the local authority in February 2009 and conditional approval has now been received.

Low-level radioactive waste from decommissioning is being stockpiled until a route is opened for its disposal.

Dounreay's operators chose an area of land adjacent to the site for a series of disposal vaults and applied for planning permission in 2006. The application was approved by Highland Council in January 2009 and forwarded to the Scottish Government for consideration.

Ministers decided not to call in the application but asked the local planning authority to include an extra condition about the establishment of a community benefit fund.

The council endorsed this last month and DSRL has now received formal notification that consent has been granted.

Construction of the disposal site is due to begin in 2011, with the first of the vaults ready to receive waste in 2014. When the site has been cleared, the vaults will be sealed and the surface restored.

DSRL is the site licence company responsible for cleaning out and knocking down Dounreay on behalf of the Nuclear Decommissioning Authority.