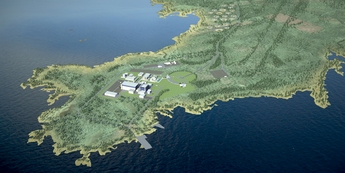 Fennovoima has chosen Pyhäjoki on Finland's western coast as the site for its nuclear power plant. Final preparatory works could be started as early as late 2012.

The Pyhäjoki site was chosen over Simo, also in Northern Finland. Studies found that both sites were suitable for accommodating a nuclear power plant in a safe and environmentally manner. However, several technical features in Pyhäjoki, including the bedrock and seismic characteristics were more favourable, Fennovoima said.

“Assessments show that the bedrock in Pyhäjoki is more solid. This means that operations like excavation works are easier to carry out,“ the company said in a statement.

“The length needed for cooling water tunnels is about one kilometer shorter in Pyhäjoki,” It added.

In addition, Fennovoima says that seismic requirements are lower than in Simo, which will impact the design of structures, systems and equipment for the plant.

Fennovoima said planning work is continuing for the Pyhäjoki plant, which will be constructed on Hanhikivi peninsula on the coast of Bothnian Bay. More detailed bedrock, environmental and water studies will be carried out on the Hanhikivi peninsula in order to prepare for licensing and permits, it said, adding that preparatory works on Hanhikivi will be started towards the end of 2012 at earliest.

The construction schedule will be elaborated after the plant supplier (either Areva or Toshiba) has been selected in 2012-2013, according to Fennovoima. The company sent bid invitations for Areva and Toshiba in July 2011 and is currently considering the Toshiba ABWR design and Areva’s EPR and Kerena.