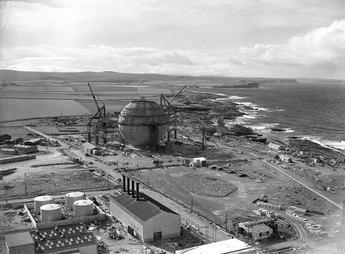 Fifty years ago, on 14 November 1959, the Dounreay Fast Reactor (DFR) first went critical. Three years later it became the first fast reactor in the world to supply power to the grid. The future of the iconic white ‘dome’, currently being decommissioned, will be determined by the mid-2010.

In 1977 the DFR was shut down: the UK government had decided that there was no need for fast reactors. Uranium resources were sufficient for power generation, in contrast to the 1950s when, at the height of the Cold War, uranium was in short supply.

A striking parallel to many of today’s nuclear construction projects, DFR was built in just four years. The mentality, too, was completely different: it was a race against time! Russia and the USA were both trying to prefect nuclear technology. Who would win the race?

Also, unlike today, no thought was given to decommissioning the reactor. Safety was considered – the dome housing the reactor was designed to implode in case of accident. And the remote Scottish site was chosen to minimise the impact in the event the worst did happen. Jonathon Kirk, 88, who worked as an operations manager during construction of DFR says: ‘on the night we went critical many of the plant managers asked to leave the site.’ It really was a leap into the unknown.

The start up was successful and the plant operated for 15 years generating 600 million kWh. The DFR, along with a number of other facilities at Dounreay is currently being decommissioned.

The highest hazard at the site, and the second highest hazard in the UK, is the 57t of primary sodium-potassium (NaK) liquid metal coolant. (The highest hazard in the UK is an old fuel facility at Sellafield.) The coolant was contaminated with caesium and also fuel debris during operation. A major chemical hazard itself as it ignites when it comes to contact with water vapour. In 2008 a £15million chemical treatment plant started work destroying the sodium using the water vapour nitrogen technique.

More than two-thirds of the NaK has been destroyed so far. The 47,000 litres that remain are heavily contaminated with radioactive caesium, so it is being scrubbed clean using an ion exchange resin as part of the destruction process. All of it should be destroyed by 2013.

When the liquid metal has gone, almost 1000 "breeder" elements positioned around the core will be exposed. These will be coated with residues of NaK. Their removal, cleaning and dismantling – using long robotic tools made by Areva NP – will start in 2013 and is expected to take another two years to complete. The tools are currently being installed.

The removal of all the liquid metal and nuclear material will leave an empty structure that can be dismantled. However the sphere is recognised as a local landmark and a national symbol of atomic heritage and its fate is still unknown.

A new consultation on the future of the structure is due to be launched in December. This will feed into the heritage strategy being prepared by Dounreay Site Restoration Limited (DSRL).

Historic Scotland is waiting for that strategy to be revealed before it considers the dome’s future. A final decision on its fate by the Nuclear Decommissioning Authority, the site owner and the body responsible for decommissioning in the UK, is expected next summer.

It is most likely that the dome will be completely dismantled by 2025 when the site is due to close. Due to high radiation levels much of the dismantling work would be done using robots.

Another option is to decontaminate the dome, leaving the empty structure as a landmark, to be seen from miles around. Still, this would be an expensive strategy – the structure needs to be maintained, and repainted every 10 years or so, at a cost of £500,000.