CVBH hoisted into place at Haiyang; and more 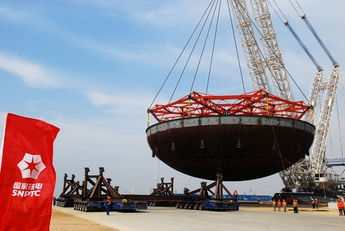 Construction has been progressing on China’s AP1000s and its EPRs, with a handful of milestones achieved in the last month. Most recently, on 9 April the containment vessel bottom head (CVBH) was successfully installed at Haiyang 1 AP1000, under construction in the country's eastern province of Shandong.

State Nuclear Power Technology Corp (SNPTC), which is building the AP1000 at Haiyang and another two at Sanmen, described the achievement as “another significant milestone in constructing world’s first batch of AP1000 nuclear power plants”.

CVBH of Haiyang NPP Unit 1 is close to 40m in diameter, with a steel plate length of 11.6m. The CVBH weighs some 677.7 tonness and took two hours and 39 minutes to lift into place. The gross lift weight was 843 tonnes, equivalent to lifting over 700 cars at one time.

In March, SNPTC announced that two construction milestones had been completed at Sanmen 1. These included the setting of the NI containment vessel 1st ring and the successful lifting of the heaviest, most central structural module in the N1 reactor building (CA01).

Meanwhile, the initial section of the steel liner of the reactor building at Taishan 1 was lifted into place on 20 March. A module, with a diameter of 40m and weight of 115 tonnes, was lifted into place using an 800-tonne crawler crane, according to reports by China Guangdong Nuclear Power Company (CGNPC), which is building the plant in partnership with French utility EDF.

A further three steel liner modules are to be made onsite prior to being hoisted into position to form part of the reactor building for unit 1. Steel liners have previously been installed panel by panel.