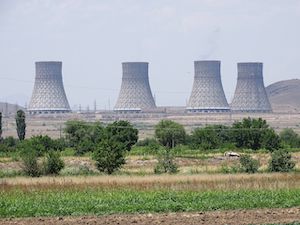 The Armenian government is negotiating with the Russian mining company Geopromining on the construction of a new nuclear power plant, Prime Minister Nikol Pashinyan told parliament on 6 October during a parliament-Cabinet Q&A session. He said an offer had been made to Armenia by one of the owners of Geopromining, a member of the Board of Directors, “we discussed the offer, we saw that the offer corresponds to the economic and state interests of Armenia”.

Pashinyan stressed that participation of the Government in the process is important as a nuclear power plant cannot be built by a private company.

The currently operating Armenian nuclear power plant was built in the 1970s with two Soviet-supplied VVER-440-V230 units, but was closed following a devastating earthquake in 1988. However, unit 2 was recommissioned with Russian help in 1995 following severe energy shortages. In March 2014, the Armenian government decided to extend the plant’s service life to 2026. Most of the overhaul (until 2019) was funded by an interstate loan from the government of the Russian Federation, the remaining work is carried out at the expense of the budget of Armenia.

Construction of a new nuclear plant has long been part of Armenia’s overall plan. However, finance has been a problem in the past with Armenia unable to attract private investors. In addition, in the past Armenia met opposition to its plans from both Turkey and Azerbaijan. However, as Turkey is now building its own plant and Azerbaijan is also considering building a plant, such opposition is now less of an issue.

Armenia 2 has been closed for some time for life extension work. Plant director Movses Vardanyan said on 7 October that reconnection to the grid would be delayed because of the need for additional checks of repair work. According to the original plans, the outage was supposed to last 140 days - from 15 May to 2 October. However the scope of work turned out to be more than expected, so the plant management decided to double-check safety before restarting the reactor. Grid connection is tentatively scheduled for 10 October.

As part of the overhaul, which has been underway since 2015, the equipment of the turbine hall (generators, turbines and auxiliary equipment), the automation unit, as well as the protection and emergency cooling systems of the reactor have already been replaced. It remains to modernise the cooling towers (cooling towers), as well as build a new open switchgear (OSG), from where the generated electricity is fed to the grid.