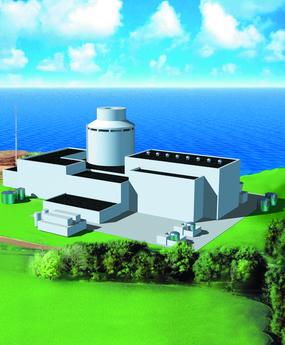 Based closely on the AP600 design, the AP1000 features enhanced passive safety systems that rely on naturally occurring phenomena – such as gravity, natural circulation and condensation – to guarantee a safe shutdown or mitigate the effects of an accident. It is designed for a 60-year operating life.

Westinghouse claims that construction of the ‘nth-of-a-kind’ AP1000 will be of the order of $1000-1200/kWe. Jack Allen, Westinghouse senior vice president of nuclear power plants, said: “The plant will be constructed modularly, which will greatly improve construction quality while reducing construction time to about 36 months from the time concrete is first poured until the time that fuel is loaded into the core.”

Westinghouse submitted its application for design certification at the end of March 2002 and the draft safety evaluation report was issued in June 2003. Westinghouse president and CEO Steve Tritch said: “Such a short review schedule was achievable because the AP1000 application was basically a power uprate of our highly detailed 600MWe AP600 standard design, which had received NRC design certification in 1999.”

The final step in the design application is to incorporate the AP1000 design into the NRC’s regulations. Such a certification, scheduled for completion in December 2005 following a public comment period, would allow a utility to reference the design in an application for a nuclear plant licence.

The AP1000 is one of two designs that will be evaluated under the US government’s combined construction and operating licence (COL) process for new nuclear plants. The NuStart consortium of nine companies plans to submit its COL application in 2008, and expects a decision by the NRC sometime in 2010. Once the COL is obtained, any combination of NuStart’s member companies could use the COL should they decide to build a new plant.

The AP1000’s FDA also has immediate implications in markets outside of the USA. According to Tritch: “An FDA from the NRC is usually required by plant buyers in other nations seeking bids for new nuclear plants. Now that we have a formal FDA, we will be able to offer the AP1000 for forthcoming requests from the People’s Republic of China.”