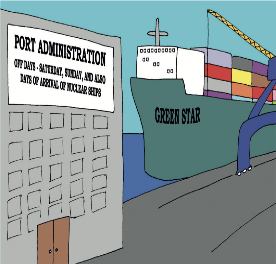 Proposals for nuclear powered container ships have returned after a decade in the doldrums. By Jeremy Gordon

BACK IN 2010 I WAS in the habit of attending conferences where executives and engineers hashed out the potential issue of using small reactors instead of fuel oil to power commercial shipping. Even though some leaders were adamant that shipping is already a relatively efficient and low-carbon industry, it was dawning on the crowd as a whole that this was not going to be enough. The shipping industry emits 4-6% of the global total, about the same as aviation, so it obviously would not be able to duck out of the transition to clean energy for ever, even if most of its emissions were in international waters. Some of the early small reactor companies were keen on this market, for example Hyperion (remember them?), but things went very quiet on this front after the Fukushima accident in 2011. It was obviously hard to promote the idea of putting hundreds of nuclear reactors at sea while memories of a tsunami causing a big accident were fresh.

Yet in that same year regulation arrived for the shipping industry, in the form of a legally binding agreement to reduce its CO2 emissions. With some exceptions, the Energy Efficiency Design Index (EEDI) is ratcheting up the efficiency of large new ships, by way of a limit on gCO2 per capacity mile that is lowered every five years. Under the auspices of the International Maritime Organization (IMO) this covers about 85% of all emissions from shipping.

Compared to 2008 levels, EEDI aims to reduce shipping’s overall greenhouse gas emissions by 50% by 2050, with CO2 emissions reduced faster — by 40% by 2030, and 70% by 2050. Since then, it has become clear this will not be enough. New and incoming national policies aim for net zero, so shipping must inevitably do the same even if IMO only has this an ambition ‘as soon as possible this century’.

As on land, burning LNG can be a bridge but not a destination for shipping, because it still emits CO2. Big ships also face challenges while in port, where they currently run their engines to supply themselves with power — raising air quality as well as greenhouse gas issues.

Electric ships have become a reality, but as yet they are small. Renewable options such as wind-gathering masts that reduce fuel use have not met expectations and even clean-burning synthetic fuels present challenges when passengers are around.

In short, a decade has passed and shipping faces the same challenges — except that there is now even less time in which to achieve even more.

The use of nuclear power at sea is not a new phenomenon at all. More than 200 naval reactors have operated successfully, as has Russia’s fleet of icebreakers. One of these, Sevmorput, is also a light freighter. There have been civilian nuclear ships in the past — NS Savannah, Mutsu and Otto Hahn — although they were not commercial successes.

Another plus for nuclear in the shipping industry is that the small reactor scene has grown enormously over the last decade. There are many designs, of which some are maturing towards demonstration and deployment. The prime example is last year’s deployment of Tamyr class icebreaker KLT-40 reactors on the Akademik Lomonosov floating nuclear power plant. Russia is now preparing to take the next step by deploying RITM-200 units, which have been proven in larger LK-60 class icebreakers, on land.

Floating nuclear power plants — reactors on barges — seem to be a growing part of our future. China wants to use them to support its claims in the South China Sea and they would seem to be a good option for a place like Singapore, which had been keen on nuclear but decided after the Fukushima accident that it could not put its small territory at any risk of evacuation. Danish start-up Seaborg proposes thousands of them, mass produced in Korea’s shipyards, as one-to-one replacements for coal fired plants located by the sea in South East Asia. If and when this technology matures it would find a natural home powering the ships themselves.

The obvious question is ‘what about the ports?’ The vessels would need permission to dock and conduct maintenance and some countries would be bound to refuse them.

There are ways around this. For example, a bulk commodity carrier working a point-to-point route might only need approval from two ports, which seems feasible — particularly in the case of China, as a consumer of commodities and potential vendor of the technology. This raises the prospect that large nuclear countries could influence their trading partners and create a port network for these vessels, if they sensed an advantage.

In places where a nuclear-powered vessel might not be allowed to dock, it might be possible for battery powered ships to attach to a nuclear-powered super tug in international waters. The nuclear vessel could take them across the ocean, powering them and recharging their batteries before detaching again and picking up a new vessel. That way the high capital cost nuclear machinery would be working continuously and its specialist crew would not be concerned with the handling of cargo. Such a super tug would only need one home port, and if it broke down another tug could take it home.

Nervous port authorities might also be reassured to know that IMO has had regulations on its books for a Code of Safety for Nuclear Merchant Ships since 1981.

A potential shift to nuclear propulsion is not the only shake-up that the energy transition has in store for shipping. At present, 40% of the global fleet is dedicated to shipping fossil fuels around the world. Given that a lot of countries say they will not use those fuels after 2050, the overall size of the shipping sector is certain to be affected in terms of numbers of vessels and crews.

Pulling in the other direction is that one of the main ways to reduce emissions is what the IMO calls ‘speed optimisation’. As in onshore transport, knocking a few knots off cruising speed can reduce drag significantly and is therefore a simple and effective way to trim emissions. More time at sea would soak up some excess ships needed, but it is an overall downgrade to the level of service.

Any self-imposed speed limits would not apply to nuclear powered ships, which could then go as fast as they want. In fact, they could go as much as 50% faster than ships do today, which is more in line with the demands of the globalisation.

It’s clear that nuclear propulsion offers huge potential for the shipping industry, but a step change in resource efficiency threatens to reduce the size of the industry overall. For that reason I think nuclear propulsion may face huge resistance from incumbent interests at sea in future, as it has on land in the past.

Rather than embrace nuclear energy and its opportunities incumbents are much more likely to find reasons to oppose it, even if that means going to extreme lengths to meet environmental targets.

But I wonder: should a start-up make a success of nuclear propulsion by carrying more, travelling faster, and doing so more cheaply than the competition. Would the traditional operators be able to resist following in its wake? What if a new business model — such as a super tug — created a niche in the energy transition that only nuclear could fill? As well as innovation in reactor designs, ship designs and business models, innovative leadership is going to be required. With small reactors, the nuclear industry has recovered something of an entrepreneurial streak. Can it find an entrepreneur in the shipping sector with the ability to create the Telsa of nuclear propulsion?