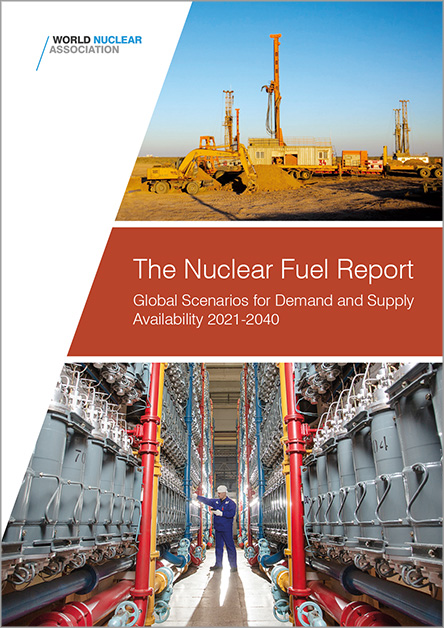 The World Nuclear Association (WNA) on 8 September launched the 2021 edition of The Nuclear Fuel Report, concluding that the positive trend in nuclear generating capacity projections that began in the previous (2019) report continues.

In the period, two newcomer countries – Belarus and the United Arab Emirates – connected their first reactors to the grid; further reactors were commissioned in China, India, Pakistan and Russia; construction of new reactors was launched in China, Iran and Turkey; and many other countries are considering either expanding existing nuclear programmes (e.g. Argentina, Brazil, Bulgaria, Netherlands, Romania, South Africa) or building their first reactors (e.g. Egypt, Poland, Uzbekistan).

The report says that nuclear generation capacity is expected to grow by 2.6% annually, reaching 615GWe by 2040 in the Reference Scenario. It found that world uranium production dropped considerably from 63,207 tonnes of uranium (tU) in 2016 to 47,731tU in 2020. Unfavourable market conditions, compounded by the Covid-19 pandemic, led to a sharp decrease in investment in the development of new and existing mines.

The depressed uranium market caused not only a sharp decrease in uranium exploration activities (by 77% from $2.12 billion in 2014 to nearly $483 million in 2018) but also the curtailment of production at existing mines, with more than 20,500tU of annual production being idled. Uranium production volumes at existing mines are projected to remain fairly stable until the late 2020s, then decrease by more than half from 2030 to 2040. Intense development of new projects will be needed in the current decade to avoid potential supply disruptions.

According to the report, there will have to be a doubling in the development pipeline for new projects by 2040. There are more than adequate project extensions, uranium resources and other projects in the pipeline to accomplish this need, but it is essential for the market to send the signals needed to launch the development of these projects.

Beyond mining, the report found that, in the conversion sector, near-term reactor requirements in UF6 will be largely covered by commercial inventories. By 2023, global conversion production is expected to meet requirements due to the ramp-up and restart of existing facilities. Nevertheless, in the long-run more conversion capacity will be needed.

In the enrichment sector, excess capacity is currently used for underfeeding and tails re-enrichment, bringing in approximately 6000-8000tU in support of the undersupplied uranium market. This will largely be reduced over time, as enrichment requirements rise due to nuclear generating capacity growth.

In the fuel fabrication sector, competition may become more intense from both the commercial and technological perspective, due to increased interest in developments of advanced fuels. Nuclear fuel demand increasing in Asia and decreasing in the West may cause fuel vendors to move from a regional to a more global market approach.

The report looks at three scenarios for world nuclear generating capacity up to 2040 - the Reference, Upper and Lower Scenarios. As of mid-2021, global nuclear capacity was around 394GWe (from 442 units), and about 60GWe (57 units) was under construction. In the Reference Scenario, nuclear capacity is expected to rise to 439GWe by 2030 and to 615GWe by 2040. In the Upper Scenario, the equivalent figures are 521GWe in 2030 and 839GWe in 2040. The Lower Scenario shows a slight increase that becomes more pronounced after 2030 due to the commissioning of new reactors in China, India and several newcomer countries, compensating for reactor closures in the USA and Western Europe.

In all three scenarios, global uranium requirements in 2040 are approximately 12% higher compared with the 2019 edition. WNA Director General Sama Bilbao y León said: “Given its unique combination of attributes – reliability, affordability, low-carbon and universal deployability – it is clear that nuclear energy will play an even larger role in the electricity and energy systems of tomorrow. The Nuclear Fuel Report makes it clear that sufficient uranium resources exist to meet the expected growth, but uranium markets need to rebalance to incentivise investment in uranium mining to support the expansion of the global nuclear fleet.”