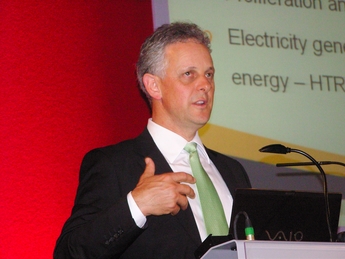 The USA and South Africa have signed a bilateral agreement on cooperation in research and development of nuclear energy.

Just days before the deal was announced, Kriek told a London audience that the PBMR project was indefinitely on hold.

Kriek said the company was now focusing on attracting funding from industries that could potentially use nuclear process heat, but noted that in the current financial environment not many companies are keen to spend money on R&D.

The cooperation agreement was signed by US secretary of energy Steven Chu and South African minister of energy Dipuo Peter in Vienna on 14 September. The two countries will collaborate in research and development of advanced technologies for improving the cost, safety, and proliferation-resistance of nuclear power systems

In a statement the DOE said one potential area of cooperation could be research and development associated with South Africa’s Pebble Bed Modular Reactor (PBMR) and the USA’s Next Generation Nuclear Plant, which are both high temperature gas-cooled reactors. The research aims to assist in the development of Generation IV technologies and to draw on the unique expertise of each country.

"As the world moves to address the climate crisis and cut carbon pollution, it is clear that nuclear energy has a major role to play in our energy future," said Chu. "This agreement reflects our commitment to a new, clean energy economy and strong partnerships with nations around the world to address our shared climate and energy challenges."

This week DOE also announced $40 million in funding will be available to support design and planning work for the Next Generation Nuclear Plant (NGNP).