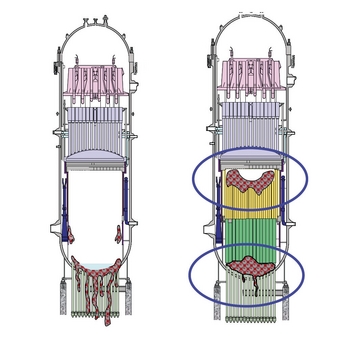 TEPCO artists' impressions of core melt in units 1 (left) and units 2&3 (right). The right image includes two cases; a best-case estimate based on data collected in March (top circle), and a worst-case estimate (bottom circle). Unit 4 had no fuel loaded in the core at the time of the incident, and so was not damaged.

-Unit 1. TEPCO now estimates that most of the fuel has drained out of the reactor pressure vessel, via the bottom-mounted control rod tubes or instrumentation penetrations, into the concrete primary containment vessel. It reasons that the unit's decay heat before seawater injection 'significantly exceeded' RPV water and materials' heat absorption capacity; it also explains why the RPV temperature has been low from an early stage. Based on what TEPCO calls 'realistic assumptions', and PCV gas analysis results, TEPCO estimates that the corium has eroded the 2m-thick PCV floor by about 70cm, but erosion has now assumed to have stopped.

-Units 2&3. Lesser amounts of fuel from units 2&3 have dropped out of the RPV and into the PCV, because decay heat was less than the total heat absorption capacity of water in the core, and based on evidence from RPV temperature trends after water injection restarted.

The study, presented at a Japanese government workshop, remains in Japanese; this article is based on an English-language summary provided by TEPCO.

In other news, TEPCO has explained how it calculates the total amount of radiation currently being emitted by the damaged Fukushima Daiichi reactors: 60 million Bq/hr.

At unit 1, the amount released is combined from two numbers: the product of radioactive dust concentration around the top of the reactor building time the assumed amount of steam generation, plus the dust concentration near the equipment hatch, times the air flow rate (total: 10 million Bq/hr). Deducted from that amount is the effectiveness of the exhaust filtration system. At unit 2, the amount is the dust concentration at the blowout panel times the air flow rate. Air flow in unit 2 is caused by air from leaks in the truck bay floor and by rising warm vapour from decay heat (total: 10 million Bq/hr). The calculation method for unit 3 is the same as at unit 1 (unit 3 total: 40 million Bq/hr). From these figures, TEPCO concludes that this discharge equates to a personal exposure of 0.1 mSv/yr at the site boundary, assuming average climactic conditions, and including external atmospheric exposure, external ground-based exposure and internal exposure through inhalation.

In other news, Fukushima site director Masao Yoshida has left his post for medical treatment (unspecified, but not linked to the crisis). He is replaced by Takeshi Takahashi, formerly general manager of TEPCO's nuclear power plant management department.

Also, TEPCO has changed the method of nitrogen gas injection in units 1-3 so that it can reach the RPV as well as the PCV. All three systems will inject nitrogen into the RPV via the head spray line, in addition to their current nitrogen injection arrangements into the PCV by various means. The unit 1 nitrogen supply will be via a hose attachment point in series to PCV injection via the AC line; the unit 2&3 RPV line will be attached through jigs to test valves on the instrument rack.