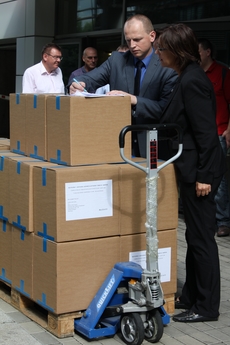 AREVA, Westinghouse Electric Company and the Czech-Russian consortium MIR.1200 have all submitted bids for the supply of the Temeín Nuclear Power Plant units 3 &4 to Czech energy company CEZ. The envelopes with their bids will be opened on 3 July 2012 and the winning bidder is due to be announced in late 2013.

“The completion of the Temelín nuclear power station is a key pillar of CEZ’ strategy; therefore, we are happy to have received three bids from major global vendors of nuclear technologies,” said CEZ CEO and Chairman Daniel Benes in a statement.

AREVA has put forward its EPR design, as licensed in Finland and France; Westinghouse has offered its AP1000, now under construction in China and the USA; and MIR.1200 consortium the VVER-1200 design that is being built at Leningrad Phase II and Novovoronezh Phase II.

The parties that qualified each had eight months to prepare their bids in accordance with the tender documentation, which specified requirements for the supply of two complete nuclear power plant blocks on a full turn-key basis, including the nuclear fuel for nine years of operation.

After opening the envelopes on 3 July 2012, CEZ is going to examine, evaluate, and discuss the bids with the bidders to achieve their optimization. The contract is expected to be awarded and the purchase contract signed in late 2013, CEZ said.

Westinghouse announced that it had submitted a ‘fully compliant and competitive bid’ to develop and deliver a turnkey dual-unit AP1000 plant for Temelin 3&4 project.

Westinghouse has teamed up with the leading Czech construction company Metrostav a.s and Czech nuclear safety instrumentation and control company I&C Energo s.r.o for the project delivery. The Westinghouse/Czech team will continue to add local partners in the coming weeks and months, it said.

Meanwhile, the MIR.1200 consortium announced that it had delivered tender documentation weighing over 1000 kg to CEZ headquarters.

The general nuclear power plant project designer Atomenergoproekt (SPbAEP), the Russian nuclear fuel producer (TVEL), and the turbine island designer Atomtechenergo were all involved in preparation of the tender offer, Rusatom Overseas said in a statement. Czech companies would also play an important role in the project, which aims to have 70% localization, it added.

“Rosatom is ready to transfer the technology and know-how for the manufacturing of key equipment for NPPs to Czech partners,” Rusatom said.

Commenting on the deal, Luc Oursel, AREVA's CEO said that the company has "unique extensive licensing and EPC contract experience" from which the Temelin project would fully benefit.

AREVA, too, said that localization is a key element of its business strategy and that 'up to 70%' of the work on its EPR projects is open to procurement by local companies. In 2012, AREVA signed cooperation agreements with over 25 Czech companies.

"Having awarded around EUR 40 million worth of equipment and service contracts to Czech companies in the last three years, AREVA plans, in addition to its commitment in the extension of Temelin power plant, to double its investments in the Czech Republic and to award its Czech partners new orders for industrial equipment and services," AREVA said in a statement.