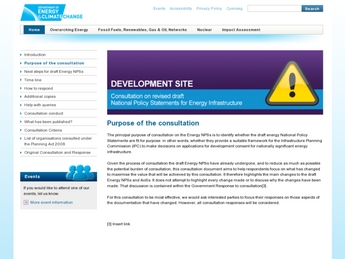 The UK coalition government will probably reject three sites — Dungeness in Kent, and Kirksanton and Braystones in Cumbria — for nuclear build by 2025.

The information was inadvertently published on a development website hosted by a third party. It appears to have been preparatory work for a new Department of Energy and Climate Change (DECC) website for the consultation on the revised draft National Policy Statements for energy infrastructure.

The website said that the Dungeness, Kirksanton and Braystones sites had: “been found to be not suitable for the deployment of a new nuclear power station by 2025.”

NEI learned about the development website from www-no2nuclearpower-org-uk; a website run by energy and environment consultant Pete Roche.

If the information on the website is correct, it suggests that eight sites (Bradwell, Hartlepool, Heysham, Hinkley Point, Oldbury, Sellafield, Sizewell and Wylfa) will be listed as suitable for new nuclear build by 2025. This nuclear site list is identical to the Jackson Nuclear Report siting-new-nuclear-power-stations-availability-and-options-for-government (published May 2007).

A Department of Energy and Climate Change spokesman told NEI that: “the government will be publishing the Energy NPS (National Policy Statement) consultation shortly which will provide detail of any changes to the NPSs and the list of sites considered potentially suitable.”

A second consultation on the revised draft NPSs is due to close on Monday 24 January 2011, according to the information on the development website. The energy NPSs are due to be finalized in Spring 2011, after the consultation and parliamentary scrutiny

The Kirksanton and Braystones sites are both greenfield sites on the Cumbrian cost. They were nominated for the strategic siting assessment by utility RWE npower.

“We cannot comment on speculation regarding the NPS until the latest version is released. The NPS is due to be published soon and we await this with interest and are likely to respond to the consultation.”

“We believe Kirksanton and Braystones are both good sites for new nuclear build and we have been pleased that this has so far been recognised in the government’s assessment of potential new sites.”