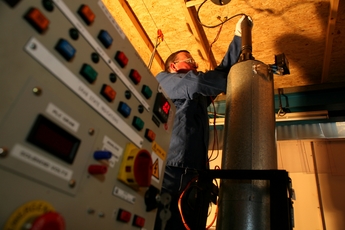 New fuelling ropes supplied to Wylfa power station in Anglesey, North Wales last around three times as long as the old ones. Staff at the site – operated by Magnox North on behalf of the UK Nuclear Decommissioning Authority – are now looking to utilise the ropes elsewhere.

Phil Morgan, fuel and reactor systems section head at Wylfa, says: “We are delighted that we have moved from ropes which previously lasted for 70 channels of refuelling on average, to ones that now last an average of 225 channels each. This is a significant improvement and we are investigating whether we can use the new design on both secondary and primary discharge routes at Wylfa as well. We are already implementing them on the transfer machine that moves the irradiated fuel from the primary cells to the secondary cells.”

Wylfa started experiencing technical problems with its ropes seven years ago. BNS was granted a five-year agreement to develop improved ropes and then supply them to Wylfa. The team quickly identified that central to lowering the failure rate was determining the exact cause of failures. The ropes had two parts that could fail, the rope and the solenoid and it was difficult to identify which part of the assembly had failed. A new rope and solenoid design was developed, which incorporated a plug and socket arrangement between the two components. This allowed the rope and solenoid assemblies to be tested and replaced individually.

The internal design of the socketed solenoid was significantly different, and in service use proved that solenoids manufactured to the new design lasted significantly longer. Furthermore, if a failure occurred, and the solenoid was removed from the rope and found to be defective, a new one could be fitted without a re-rope of the hoist.

Andy Tranter, commercial engineer at BNS, said: “Close liaison with the station, analysis of failure data, and development of the solenoid coil all resulted in further reductions in failure rates.”