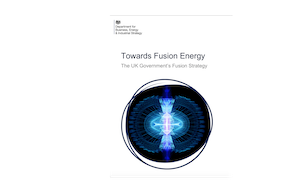 The UK government on 1 October published a strategy setting out how it aims to leverage scientific, commercial and international leadership to enable the delivery of fusion energy. It has also launched a consultation seeking views on the regulatory framework for ensuring the safe and effective rollout of fusion energy.

In the foreward to the 26-page document, “Towards Fusion Energy”, George Freeman MP, Parliamentary Under Secretary of State, Minister for Science, Research and Innovation, notes that the UK Prime Minister’s 10 Point Plan has set out the key measures to help reach Net Zero targets by 2050 but adds: “However, given rising energy demand globally we also need to look beyond the next 30 years.” It says the UK is “widely recognised as a world-leader in the most promising fusion technologies”. Noting that, in the UK, fusion research programmes have supported over £1bn of UK economic activity over the last ten years.

“Building on decades of study at globally unique research facilities, the UK Government has launched the world-leading STEP (Spherical Tokamak for Energy Production) programme, to build a prototype fusion power plant in the UK by 2040. At the same time, private companies in the UK are developing their own fusion power plant designs. UK manufacturers and engineers are beginning to form a fusion supply chain to support these programmes.”

This paper sets out the UK Government’s strategy to move from a fusion science superpower to a fusion industry superpower. With this plan, the UK hopes to lead the world on the commercialisation and deployment of this potentially world-changing technology.

Building on the Ten Point Plan for a Green Industrial Revolution and the 2020 Energy White Paper, the Strategy sets out these ambitions in further detail. It has two overarching goals:

The Strategy is focused on achieving these goals by working with the UK Atomic Energy Authority (UKAEA) to secure UK leadership across three ‘pillars’: international; scientific and commercial.

While the UK Fusion Strategy applies to all technological approaches to fusion, the research programmes described are based on magnetic confinement fusion (MCF) in which the UK is widely recognised as a world-leader.

“The UK will need to continue to collaborate with the best talent and facilities globally to deliver our fusion energy objectives. The UK already has strong bilateral and multilateral fusion collaboration arrangements. These are structured in a way that maximises the development of fusion science and economic opportunities for UK businesses, whilst protecting the UK’s competitive advantage.”

Through international leadership the UK will:

In the short term, the UK Government intends to exploit the economic benefits to fusion research “to help build back better and level up economic opportunity across the country”. However, “it is the long term benefits of commercially viable fusion energy that are the real prize”.

Analysis suggests that the annual fusion energy market (in present values) in 2100 could be worth around £52bn, rising to £167bn if the capital cost of fusion power plants could be reduced by 30%.

The challenges of fusion energy remain considerable, the Strategy notes. “As with any technically demanding goal, there will be setbacks. However, advances in fusion science and engineering capabilities mean that there is increasing confidence in the fusion sector’s ability to overcome these….This strategy demonstrates the UK’s commitment to meeting those challenges head on.”

Fusion energy will require continued international collaboration. The Straegy concludes: “So, while this paper sets out the UK’s national strategy on fusion, the UK is ready to engage with potential collaborators, from national governments to individual experts in fusion technology, to help deliver a technology that could change the face of global energy production and provide a genuinely long term solution to climate change.”

The UK government has also published a green paper setting out proposals for the regulation of fusion energy. "Fusion energy facilities will need to be regulated appropriately and proportionately in the UK to maintain public and environmental protections, provide public assurances and enable the growth of this low-carbon energy industry," the paper says. "We want fusion developers to be able to plan with confidence and the public to understand the basis for the government's approach to the regulation of this emerging technology."

To inform policy on the regulation of fusion energy in the UK, the government has launched a consultation to share knowledge and offer views on the proposals in the green paper. The consultation closes on 24 December. The government will publish its response in early 2022, summarising the received responses and setting out the actions that will be taken.