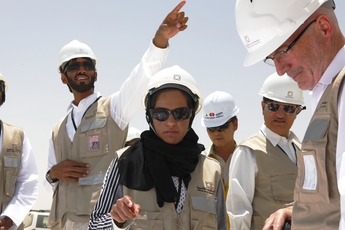 The Federal Authority for Nuclear Regulation (FANR) of the United Arab Emirates (UAE) has granted the Emirates Nuclear Energy Corporation (ENEC) a licence to construct two nuclear power reactor units at its proposed Barakah site in the west of Abu Dhabi Emirate.

The 'Licence for the Construction of Units One and Two of the Barakah Nuclear Facility and Related Regulated Activities' was approved by the FANR Board of Management, chaired by H.E. Dr Ahmed Al Mazrouei, at its meeting on Tuesday, 17 July. The Licence authorises ENEC to construct two Korean-design advanced pressurised water reactors of the type known as the APR1400, each capable of producing 1,400 megawatts of electricity. It does not allow ENEC to operate them. ENEC must apply to FANR for a separate operating licence.

“The issuance of a construction licence is a significant milestone in the UAE’s nuclear energy programme,” said Al Mazrouei.

At a press conference held in Abu Dhabi today, FANR Director General Dr William D. Travers added: “Our comprehensive review of the construction licence application was carried out by more than 200 technical experts over a period of 18 months. The reviewers scrutinised submissions by ENEC covering all required topics including the adequacy of the proposed site, the design of the facility, the safety analysis, management systems and quality assurance for construction, radiation safety measures, physical protection and safeguards. It was designed to ensure that all applicable technical and legal requirements were met.”

“Going forward,” he said, “during the construction itself and during our review of any operating licence application, we will continue to be conscious of our responsibility that nuclear power in the UAE is used safely, securely and only for peaceful purposes.”

The approval is the result of a thorough review by FANR of ENEC’s December 2010 application for a construction licence. It follows licences FANR previously granted to ENEC for selecting and preparing the site. It also builds upon an additional assessment by ENEC of lessons learned from the March 2011 accident at Japan’s Fukushima Daiichi Nuclear Power Station. This assessment, which was requested and reviewed by FANR as an integral part of the application, demonstrated the robustness of ENEC’s proposed plant. It also resulted in a number of design enhancements for added safety.

In line with its commitment to operational transparency, FANR has also published on its website the Safety Evaluation Report of Barakah Units 1 and 2, which forms the basis of its decision to issue the construction licence.

FANR was established on 24 September 2009 in accordance with the Federal Law by Decree No 6 of 2009 Concerning the Peaceful Uses of Nuclear Energy. It is the sole UAE authority that licenses and inspects those who use nuclear technology (as in nuclear power plants) or radiation technology (as in radioactive sources used for oil exploration or medical purposes). FANR currently employs 159 staff from 25 countries. Fifty-four per cent of FANR’s staff members are Emiratis.

So far FANR has issued 13 regulations and several regulatory guides that lay out the requirements for safety, security and safeguards of nuclear facilities in line with international best practices, standards and commitments.

FANR’s Safety Evaluation Report (SER), which forms the basis of the decision to issue the construction licence to ENEC, contains 223 specific review areas and consists of more than 2,500 pages describing the technical findings.

During the review FANR posed ENEC almost 2,000 questions, known as Requests for Additional Information (RAIs). Some of these required more data, documentation or meetings on specific technical issues while others were basic text clarifications. The Korea Institute of Nuclear Safety (KINS) also provided FANR with its Safety Evaluation Report of the Shin Kori Nuclear Power Plant Units 3 and 4, which is the reference plant for Barakah.

The design of Barakah Nuclear Power Plant Units 1 and 2 takes into consideration site-specific factors in the UAE such as higher temperatures of air and seawater, the effects of dust and sandstorms, and electric grid voltage and frequency.

FANR used technical support organisations (TSOs) to support its own team of nuclear safety specialists. These seven TSOs with significant experience in similar projects across the world came from five different countries. In total more than 200 FANR staff members and international experts spent more than 150 person-years to review the application.

During December 2011, an international mission of senior experts, organized by the International Atomic Energy Agency (IAEA), reviewed the effectiveness of the UAE nuclear regulatory framework as implemented by FANR. The mission reviewed organisational arrangements and implementation details of FANR’s review of Barakah Units 1 and 2 Construction Licence Application. The mission concluded that “FANR [had] essential regulations and a review process for effectively conducting the review of the applications received to date”, and that the “Review and assessment in FANR with the support of TSOs [was] organizationally a well arranged and managed process”.

The licence authorises ENEC to import to the UAE equipment and technology exclusively for the construction of the nuclear power plant. This includes specially designed or prepared components, equipment or technology directly associated with the APR1400 design.

It also authorises ENEC to conduct activities related to construction, namely the manufacture, use, transport, possession, storage, assembling, installation, inspection and testing of structures, systems and components (SSC) and carrying out of civil works comprising the nuclear power plant, including supporting and auxiliary equipment and associated facilities.

During the construction phase, FANR will carry out rigorous inspections to verify that ENEC, the licensee, conducts the activities in accordance with FANR regulations and licence conditions. Inspections will examine work at the site, at the offices of the licensee and its contractors, and at major component vendors located in the Republic of Korea, the US and elsewhere.

Before ENEC can operate the facility, it must obtain a separate licence from FANR. ENEC’s application for an operating licence must describe the final design and safety analysis of the facility including information developed since the issuance of the construction licence. It must give complete information on the operation of the facility including the organisation, procedures and training to ensure safe operation, plans for start-up testing and initial operations, plans for the conduct of normal operations including periodic testing and maintenance, and plans for the management of emergencies.

To put this regulatory approval into global context: according to International Atomic Energy Agency (IAEA) data, the UAE is the first “newcomer” country in 31 years to authorise the construction of its first nuclear power plant since China did so in 1981.