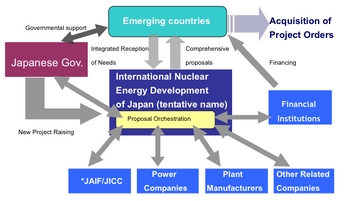 A consortium of six Japanese companies has set up an office to prepare for the launch of a company to promote power plants projects in emerging nuclear countries. The new company, tentatively named ‘International Nuclear Energy Development of Japan’, is due to be launched in the autumn of 2010.

A planning committee established by the Ministry of Economy, Trade and Industry (METI), the three electric power companies (Tokyo, Chubu and Kansai) and plant manufacturers (Toshiba, Hitachi and MHI) in June has already been considering a public-private proposal that will aim to receive nuclear power plants project orders in Vietnam.

Following the launch of International Nuclear Energy Development of Japan, the company will propose a comprehensive package that will allow the dissemination of Japanese technologies and experience to countries like Vietnam. This package will include provision for power plant construction, O&M and human resource development, which will all be bolstered by legislative and financial support from the Japanese Government.