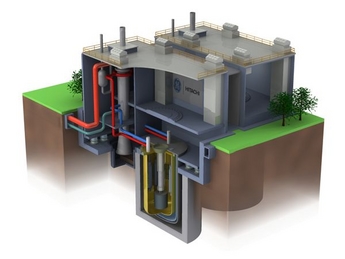 The deal would aim to determine the suitability of deploying a 299MW PRISM reactor at the Department of Energy's Savannah River site, which is run by SRNS, a private-sector consortium lead by Fluor Daniel, Northrup Grumman and Honeywell.

The site seems to be focusing particularly on R&D of small modular reactors. "I envisage a clean energy campus, where we will work together with the private sector," said the new director of the Savannah River National Laboratory, Terry Michalske, during a press conference.

PRISM R&D stalled after US federal funding for the GNEP programme was wound down in 2009. Kevin Walsh, GE's senior vice president for nuclear fuel cycle, told Nuclear Engineering International in September 2010 that no PRISM research was then taking place, but that research was mostly complete.

"If we could get government funding to go forward with an experimental installation of the PRISM reactor, then the detailed design would be done at that point. The early design and testing [in GNEP] was to further work done on the EBR at Argonne National Laboratory, which is what the PRISM concept was based on."

He also explained that GE-Hitachi leans away from reprocessing, and towards recycling, as a potential future fuel cycle in the USA: "Our vision is recycling—you burn the actinides in a fast reactor, such as PRISM, and you don't separate plutonium. That alleviates some of the proliferation concerns, and you get as close to closing the fuel cycle as practical. You also reduce waste, and reduce the half-life of radioisotopes that are disposed."