Rosatom signs agreements in Dubai after presenting its SMRs 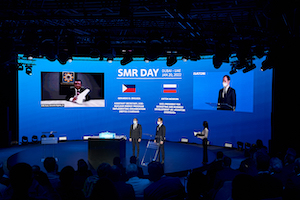 Likhachev noted that the world is currently seeing favourable changes in how nuclear energy is perceived: “For me personally, last year’s UN Climate Change Conference in Glasgow was a watershed moment. I literally felt the winds of change. Not just at COP26 but at all energy and climate conferences in 2021 it was clear that people were realising that a carbon-free future is impossible without the peaceful use of nuclear technology.”

Answering questions during the panel discussion, he described the advantages of SMRs. “The scope of big nuclear power is obvious – providing access to a reliable, uninterrupted, low-carbon source of electricity in countries with high demand and highly developed infrastructure."

"Small NPPs occupy a different niche: supplying power to remote regions, island states, countries with a small total power base, or specific industrial projects, such as mining. There are other obvious technological advantages - the modularity of the reactors… the reduced period of construction … and lower start-up costs. SMRs can supply energy and heating where large-capacity plants are not feasible,” he said.

Kirill Komarov, First Deputy General Director for Development and International Business at Rosatom, pointed out that Rosatom offers not only a unique product but also a reference technology with operating experience in Russia. “The floating power unit Academik Lomonosov has been supplying the Chukotka port city of Pevek not only with electricity, but also with heat for more than two years. In addition, we have started implementation of our first small-capacity land-based NPP based on the RITM-200N reactor in Yakutia, which will be connected to the grid in 2028.”

Following the event Rosatom signed several agreements including a memorandum of understanding (MOU) with the Ministry of Energy of the Kyrgyz Republic on cooperation in nuclear power plant construction, a MOU with the Armenian NPP, as well as an agreement on intentions with PJSC Seligdar on the supply and consumption of energy by low-capacity NPPS for the development of the Kyuchus gold deposit in Yakutia. In addition, a joint action plan was signed online with the Philippines for a preliminary feasibility study on SMRs.

Rosatom and Kyrgyzstan agreed to cooperate in the construction of a low-power nuclear power plant with a RITM-200N reactor. The MOU also provides for assistance in the development of the nuclear infrastructure of the Kyrgyz Republic and joint work to improve the skills of scientific and technical personnel in various areas of the peaceful use of atomic energy. “Decarbonisation and the development of environmentally friendly energy sources is a current global trend, from which Kyrgyzstan does not want to stand aside. We are confident that further cooperation with Rosatom will open up new horizons for the development of the energy, economy and industry of our country,” said Tilek Aytaliev, Kyrgyz Deputy Energy Minister.

Rosatom and the Philippine Energy Ministry signed a joint plan and terms of reference for a preliminary feasibility study for the implementation of an SMR project. This was based on a 2019 Memorandum of Intent. “We are pleased that our Philippine partners are ready to continue our joint work in this direction,” said Evgeny Pakermanov, President of Rusatom Overseas.

The MOU between Elektrakayan CJSC (Armenian NPP) and Rusatom Overseas was for cooperation to study the possibility of building new nuclear power units of Russian design at the site of the Armenian NPP. “The use of modern Russian nuclear technologies is an integral part of a stable energy supply in many countries of the world. I am sure that further cooperation in the construction of new nuclear power units will be an important factor not only for the development of the economy and the growth of the welfare of the Republic of Armenia, but also for the further development of strong good neighbourly relations between our two countries,” said Rusatom Overseas President Evgeny Pakermanov.

“The only Armenian NPP produces about 40% of all electricity in the country and has been a clean and reliable source of energy since 1977. After the expiration of its service life, we want to continue to have nuclear energy in the energy balance, therefore, first of all, we will consider modern Russian nuclear technologies, which are the most advanced in the world,” said Armenian NPP Director General Eduard Martirosyan.

Rusatom Overseas signed more detailed agreement with PJSC Seligdar on the supply of a small modular reactor for the development of the Kyuchus gold deposit in the Ust-Yansky and Verkhoyansk regions of the Republic of Sakha (Yakutia). Kyuchus is one of the largest gold ore deposits in Russia with reserves of more than 175 tons. Under the agreement, a 40-year period for the supply of electricity from the world's first ground-based SMR with a RITM-200N reactor is specified from 30 June 2028. The term for use of nuclear energy can be increased, in view of the high probability of expanding the reserves of the field. The parties intend to conclude an agreement for the supply of electricity by 30 September 2025. PJSC Seligdar anticipates that the project will use at least 35MW of nuclear power.

“The project for the construction of the world's first ground-based low-power NPP is being actively implemented, and the fact that we already have a guaranteed industrial energy consumer is certainly an important factor in the commercial success of the project,” said Pakermanov.

“The development of the Kyuchus gold deposit is a landmark project not only for PJSC Seligdar, but also for the development of the entire Russian Arctic as a whole. I am confident that the presence of such a reliable source of energy … will contribute to the successful implementation of the project for many years to come,” said Sergey Ryzhov, Chairman of the Board of Directors of PJSC Seligdar.

The Yakutia project with the latest RITM-200 reactor facility is based on many years of experience in operating small reactors on Russia’s nuclear-powered icebreakers (more than 400 reactor-years). To date, six reactors of the RITM series have been installed on the three newest multi-purpose icebreakers.  The ground-based SMR is designed to supply power to isolated power systems or remote areas and consumers. It is characterised by its compactness and modularity, short construction period and high safety standards. Rosatom says its construction will provide a stable and clean energy supply to the project to develop the Kyuchus gold deposit. Commissioning of the plant in the village of Ust-Kuyga is scheduled for 2028.

Rosatom signed an agreement the Department of Energy of the Republic of the Philippines for a feasibility study on SMRs (Credit: Rosatom)