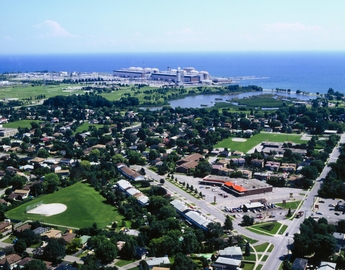 Launching the first official discussion of new reactor construction in Canada for more than two decades, Dwight Duncan, energy minister within Ontario’s Liberal government, said the province aims to have an installed nuclear energy capacity of 14,000MWe, up from the current operational level of 11,400MWe. This level is expected to produce around 50% of the province’s electricity by 2025, approximately the same as at present.

With electricity consumption forecasted to increase 40% over the next two decades, the provincial plan also sees the doubling of existing wind and hydro capacity as well as setting highly ambitious energy conservation targets.

“We’ll be aggressive with respect to renewables, with respect to conservation, and with respect to new generation,” government leader Dalton McGuinty pledged while endorsing plans for new nuclear construction. “There are all kinds of great political reasons for running away from this. But we will not do that.”

The McGuinty government’s announcement came while nuclear industry officials were meeting in Toronto for the 27th annual conference of the Canadian Nuclear Society (CNS). Reaction at the conference was enthusiastic. “This is good news,” said Jeremy Whitlock, a former CNS president. “Whether it’s refurbishments or new builds, it’s good to have a visible, viable plan for the future.”

Response from the power generation industry was also positive. “We have to get on with it, rather than continue with endless hand-wringing over what technology to use,” said David Butters, president of the Association of Power Producers of Ontario. “We’re perilously behind on electrical supply,” he added.

To kick-start the nuclear renewal, the McGuinty government has called on Ontario Power Generation (OPG), the province’s publicly owned electrical utility, to investigate building one or two new reactors at a cost of C$2 billion to C$3 billion (about $1.8-$2.7 billion) at an existing nuclear station such as the Darlington nuclear station near Toronto, which was designed to accommodate expansion.

“We’re being asked to start the process towards an environmental assessment of building new units,” said OPG spokesman John Earl. “We have to start putting together some sort of project description for new build.”

OPG has also been asked to investigate refurbishing four ageing 516MWe (net) Candu reactors at the Pickering B nuclear station near Toronto. Because two of the Pickering station’s eight units have already been refurbished in recent years, Earl noted, OPG can rapidly develop a project description for further refurbishments. “We have a model to work from,” he said.

CNSC director general Ian Grant said the CNSC recently reviewed new plant licensing procedures, which hadn’t been updated since the 1970s. “We have a new legislative framework under laws passed in 2000,” said Grant, “and there are new federal environmental assessment laws. We also have new regulatory standards for nuclear power plants. We think a site application will necessitate federal environmental assessment. No licences can be issued without it. Our experience with federal environmental panel reviews is they take between two and three years at least. We can review the site while the environmental review proceeds. Then we would review a licence to construct. And that requires us to review the specific technology involved in detail.”

Grant declined to speculate on how long the process might take, although he did note that a ten-year timeline is being “bandied about.”

Signaling that it is anxious to shorten the regulatory timelines, the Ontario government steered around calls from environmentalists and renewable energy advocates for a more detailed public review under provincial law of the province’s 20-year electricity supply plan, which will set targets for conservation, new reactor construction, renewable energy goals and new transmission lines.

A provincial review would require the government to present proof that the supply plans now being drafted by officials are cost effective and environmentally sound, and would allow opponents the opportunity to re-examine the province’s often-turbulent experiences with its fleet of 20 operating and prematurely disabled Candus.

This review would take at least two years, and would have to be done before the CNSC and federal environmental reviews.

Duncan said the province exempted its energy plans from provincial assessment in order “to give clarity to the government’s view” endorsing the need for large-scale nuclear investment.

Environmental groups have said they intend to challenge Duncan’s strategy to expedite a nuclear expansion through a regulatory exemption. They complain that under the government’s approach, renewable energy projects such as wind and solar, as well as major transportation infrastructure projects, require more detailed assessments than the proposal to build new nuclear reactors. They noted that previous provincial energy plans were reviewed under provincial environmental assessment laws. “The government has clearly breached the Ontario Environmental Bill of Rights,” said Michelle Swenarchuk, executive director of the Canadian Environmental Law Association (CELA), which has a strong record challenging infrastructure projects. Swenarchuk added: “We’re considering our options.”

In a preliminary indication the government will have to fight for its nuclear plans, Ontario environmental commissioner Gordon Miller, the province’s environmental ombudsman, has said the public was “deprived of its right to participate” by the government’s decision to bypass provincial environmental assessment laws.

A poll commissioned by the Canadian Nuclear Association suggests the Canadian public views coal and nuclear as the least desirable energy sources, with wind, solar and hydro strongly preferred. While a majority support upgrading and refurbishing existing nuclear plants, over half of those polled (59%) oppose new nuclear construction – suggesting the McGuinty government’s decisions could prove politically volatile during Ontario elections slated for the autumn of 2007. In a speech to political supporters a week after announcing the plan for nuclear renewal, McGuinty made a seemingly contradictory admission. “I don’t like nuclear energy,” he told his supporters.

As the government clears a path for new nuclear construction, analysts suggest the plan to investigate building new units is well-suited for the creation of a more ambitious nuclear expansion plan as the province refines its future electricity supply plans.

“What he is trying to do here is dress up an unpopular nuclear expansion message with some politically correct words about conservation and renewable energy,” said Adams. “The conservation goal they have set is unachievable.”

Adams also thinks the government’s targets for wind and hydro are unrealistically high. He argued the plan to diminish nuclear supply while restraining growth in the nuclear supply mix to 20% amidst forecasts of a 40% growth in overall electricity demand is likely to be revised to favour greater nuclear growth.

“Both the conservation and renewable energy targets appear to be designed as sweeteners to get the public to accept a new nuclear generation plan. It’s part of a plan to jack up nuclear commitments”, said Adams. “The government’s call for 14,000MWe of nuclear supply appears to be merely a starting estimate. As realities set in with respect to conservation and renewables, I expect to see the nuclear plans expanded.”

Further pressure to expand new nuclear construction may also result from OPG’s investigation of prospects for refurbishing four 516MWe Candu units commissioned between 1983 and 1986 at Pickering B.

As OPG evaluates Pickering B, its experience with four 515MWe units commissioned between 1971 and 1973 at Pickering A, which were laid up in 1997, may prove instructive. Restarting two of the Pickering A units took more than four years and cost well over C$2 billion. In 2004, a government-appointed review panel described the cost overruns and time delays during the refurbishment of Pickering A unit 4 as “alarming”.

Last year the McGuinty government elected to abandon the other two units at Pickering A rather than repeat the exercise. That decision built momentum for the new reactors the government now wants. A decision not to refurbish the Pickering B units would prompt consideration of additional new reactors.

As the pace quickens for new build in Ontario, AECL, designer of the Candu units in the province, is lobbying hard to hang onto its Canadian reactor monopoly. AECL president Robert van Adel recently argued that the Candu supports 30,000 Canadian jobs and 150 Canadian-based enterprises. “Canada is Candu country,” he said.

In March, AECL announced its intention to bid under the banner of “Team Candu” in concert with suppliers and contractors including GE Canada, Babcock & Wilcox Canada, SNC-Lavalin Nuclear and Hitachi Canada. Although AECL has confirmed it would offer both its Candu-6 design and the third generation Advanced Candu Reactor (ACR) design, the Candu-6 units have been licensed in Canada since the early 1980s, whereas the ACR will require licence review by the CNSC. In addition, AECL’s efforts to introduce its ACR lag behind those of Areva, which is building a third generation reactor in Finland, and Westinghouse, whose third generation design is already approved in the USA.

Reactors promoted by AECL’s competitors would also require first-time licences. “Although our standards are technology neutral, it would propose challenges to license new reactor types, particularly with respect to the PWRs,” said CNSC director general Ian Grant. “But I don’t think it would take a lot longer to license a new reactor type than it would with a reactor type we’ve already licensed.”

Although a government statement said it “prefers to use Canadian companies and technology,” it noted: “Its first obligation is to the people of Ontario.” Speaking after he announced the plan to proceed toward new build, Duncan noted that Ontario’s historical experience with Candu reactors “hasn’t been that good,” while acknowledging discussions had begun with AECL as well as Areva, GE and Westinghouse. “We are going to get the best technology at the best price that we can for our ratepayers,” Duncan said, adding: “It is not a done deal by any stretch of the imagination.”