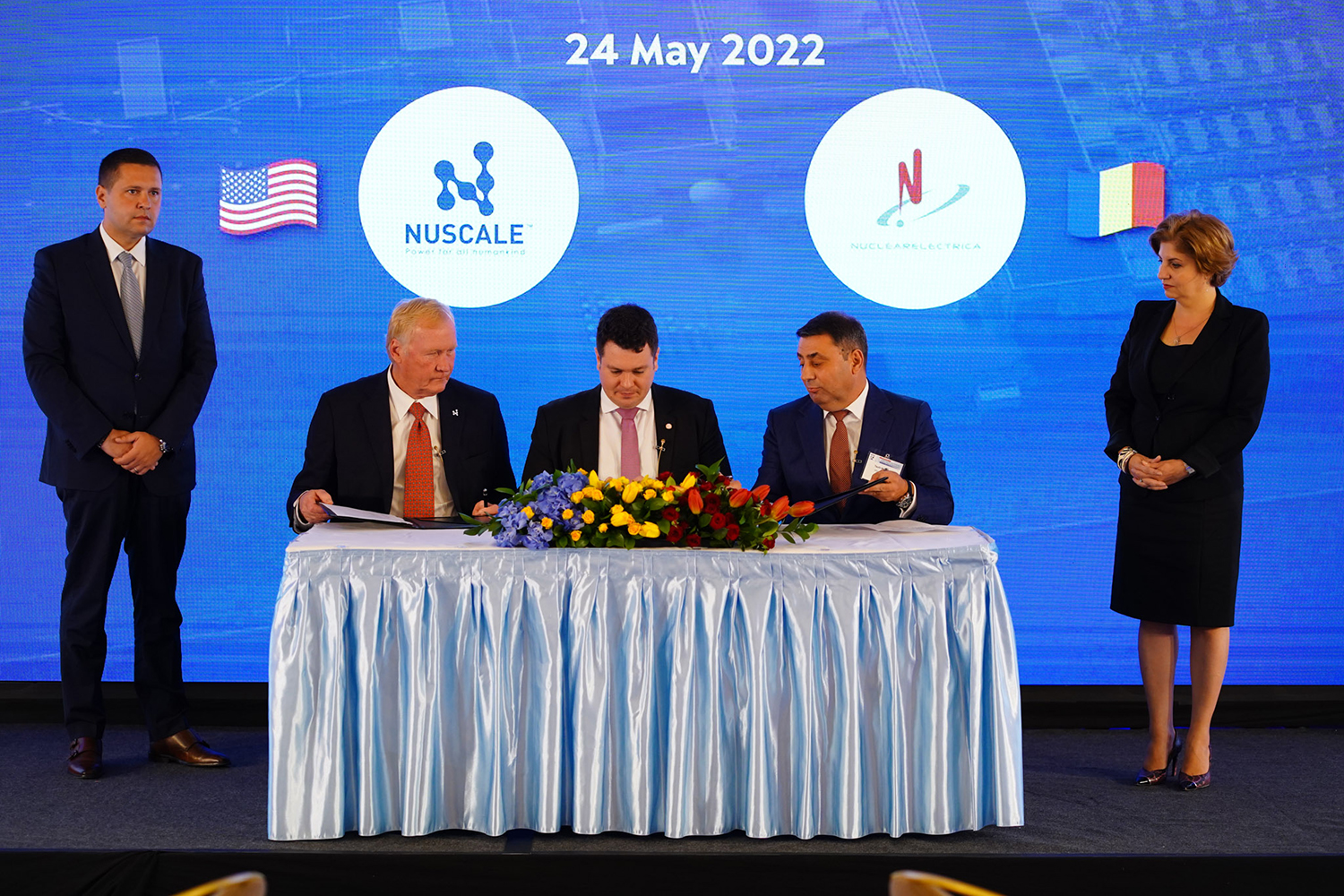 US-based NuScale Power announced on 23 May a Memorandum of Understanding (MOU) with Romania’s state nuclear power corporation SN Nuclearelectrica to conduct engineering studies, technical reviews, and licensing and permitting activities at a site in Doicesti, Romania that is the preferred location for the deployment of the first NuScale VOYGR power plant. The announcement, in advance of a small modular reactor (SMR) workshop in Bucharest, hosted by the United States Trade and Development Agency (USTDA), is the latest step in NuScale and Nuclearelectrica’s partnership to bring advanced nuclear technology to Romania.

It is a key advancement of a teaming agreement signed in 2021, under which NuScale and Nuclearelectrica are taking steps toward deploying a first NuScale VOYGR-6 (6-module), 462MWe, power plant in Romania. Romania has the potential to accommodate the first deployment of SMRs in Europe and become a catalyst for SMRs in the region, as well as a base for supporting operatorship of this new technology in other countries, NuScale said.

USTDA awarded a grant to Nuclearelectrica in early 2021, for the conduct of a study to identify and assess several sites across Romania, including locations where existing coal-fired power plants could be replaced with SMR plants. The study was performed by US firm Sargent & Lundy, and identified several potential suitable sites, including the Doicesti site, which Nuclearelectrica has identified as the preferred location for the first SMR deployment.

“The site selection it’s a great first step for Romania in our SMR roadmap, after more than three years from our first MOU with NuScale, in which we analysed the technology, its safety, its maturity and its readiness towards deployment and meeting Romania’s energy security and decarbonation goals,” said Nuclearelectrica CEO Cosmin Ghita. “The Nuclearelectrica team, based on its track record of operating at nuclear safety as one of the safest performing nuclear plants in the world, has the experience, knowledge and professional skills to embark alongside NuScale for the first deployment of a small modular reactor in Europe.”

USTDA Director Enoh T Ebong, said, “In funding this siting study, our goal was to build stronger ties between the US and Romanian nuclear power industries and create new business opportunities for US industry in an important market. We look forward to the successful deployment of US SMR technology to Romania.”

The following day, at the SMR workshop, Nuclearelectrica, NuScale & E-Infra signed an MOU to explore the deployment of NuScale’s SMR technology on the former Doicesti power plant in Dambovita County. The companies will conduct engineering studies, technical reviews, and licensing and permitting activities at the site.

The Doicesti former coal fired plant site, under decommissioning, fully complies with the siting criteria required by international and national standards. The site is available in due time to meet Romania’s targets for SMR deployment this decade and allow Romania to become a hub for SMR deployment in the region, said NuScale. Specifically, the MOU outlines the next significant milestones for Nuclearelectrica and NuScale to develop baseload power technology on the Doicesti site, owned by Nova Power & Gas, E-Infra Holding. Following the MoU, the companies will advance the examination to deploy this decade a NuScale 6-module, 462MWe plant at site. This is estimated to generate 193 permanent power plant jobs, 1,500 construction jobs, 2,300 manufacturing jobs and help Romania avoid 4 million tons of CO2 emissions a year.

Cosmin Ghita said the MOU would advance the deployment of NuScale technology based on more than three years of co-operation. “The evaluations of the site ensure that the safety standards for nuclear plants can be met on all aspects, and the site will be subject to further examinations, as per standard requirements during the licensing process. Doicesti community has more than 50 years tradition in the energy production field and will be benefiting from the new life of the former plant: local jobs, engineering education for the new generation, projects for the local economy and industry.”

Teofil Mure?an, Chairman of the Board of Directors of E-INFRA, a holding company that includes Nova Power & Gas said the old coal-fired plant in Doice?ti “will return to the National Energy System, with a similar installed capacity, with an ultra-modern, sustainable technology, with a long life”. He added: It is a replicable model, almost perfect from an energy and economic point of view, in which the new energy capacity is integrated using the existing connections to the utilities.”

Ghi?a said Romania aimed to have a leading position in supporting the production and assembly of SMR components, and to become established as a training centre for future operators and specialists. As part of this, Romania will have the first simulator for the control room of a NuScale SMR in Europe, which will be used for the training of the new generation of engineers. NuScale said its SMR simulator, being set up in collaboration with the US and Romanian governments, will be installed at the University Politehnica of Bucharest to support workforce capacity building of Romania’s next generation of nuclear experts, technologists and operators. It will be the fourth in total, but the first outside the USA.