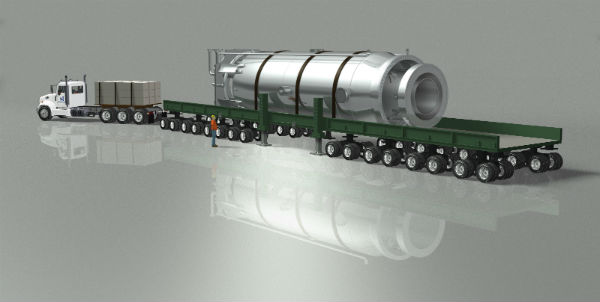 US-based NuScale Power announced that it has finalised an agreement with Sarens USA to support deployment of its small modular reactor (SMR) and provide a cash investment in NuScale.

Sarens USA, the global leader in crane rental services, heavy lifting, and engineered transport, will provide both heavy crane supply for construction as well as engineering, and transportation planning, and will be the key heavy haul provider that gets the NuScale Power Module™ from the factory to the first site.

As part of the agreement, Sarens will provide a long-term investment in NuScale, signalling a growing commitment from a major global strategic player as an investment partner. NuScale’s exclusive engineering, procurement, and construction (EPC) contract partner and majority investor, Fluor Corporation, will also utilise Sarens for construction site cranes. Sarens is also positioned to provide additional support to both NuScale and Fluor.

Sarens will also be supporting NuScale Power Module assembly work for the development of the NuScale power plant for the Utah Associated Municipal Power Systems' (UAMPS) Carbon Free Power Project (CFPP). Work with Sarens will begin over the next six months.

About the NuScale SMR

NuScale in August 2020 was the first small modular reactor to receive design approval from the US Nuclear Regulatory Commission (NRC).

Earlier, NuScale Power updated its evaluations for the technical feasibility and economics of producing hydrogen using heat and electricity from a NPM following a recently announced 25% power increase to a total of 250MWt (77MWe) per module. This updates a 2014 study that was carried out together with Idaho  National Laboratory. The analysis has found that a single 250MWt NPM could produce 2053kg/hour of hydrogen, or 50 tonnes a day, up from 1667kg/hour of hydrogen or 40 tonnes a day for a 200MWt module.

Moreover, as a result of the lower levelised cost of electricity from the increased power output, hydrogen produced by a NuScale high-temperature steam electrolysis system is forecasted to be cost competitive with high capacity factor renewable hydrogen cost estimates while also providing continuous, controlled hydrogen production, the company said.

NPM’s multi-module design means it could produce electricity for the grid while allocating one or more modules to economically produce hydrogen when electricity demand is low.

Photo: Mock-up of a NuScale nuclear reactor being transported on a truck (Source: NuScale Power LLC)