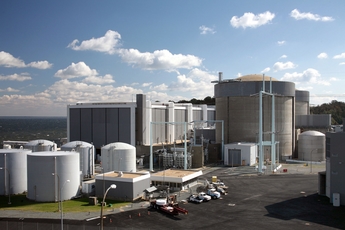 The Maryland Public Service Commission has approved EDF's 50% purchase of Constellation Energy that could lead to the construction of an EPR at Calvert Cliffs, provided the two utilities meet several conditions.

First, they must hand residential ratepayers a $110 million rebate before March 2010. Second, the utilities must invest $250 million cash in Baltimore Gas & Electricity, a wholly-owned subsidiary of Constellation Energy, before July 2010. There were several other additional financial stipulations.

The Maryland commission said, "These conditions not only should provide BGE with the additional capital necessary to provide safe and reliable service at just and reasonable rates, but should enhance its financial stability." It then went on to quote investor Warren Buffett: "As with any prudent investment, the returns to ratepayers may not be flashy or immediate, but then again, 'someone's sitting in the shade today because someone planted a tree a long time ago.'"

The commission complained about the utility's claims that approval of the deal guarantees that Calvert Cliffs 3 will be built. "The decision to build Calvert Cliffs 3, and the fate of any impact to our state from that project, lies in the companies' hands at this point, not ours, and depends on a great many pending and uncertain decisions that are the responsibility of others...It is unfortunate, though,, if public officials, unions, churches, chambers of commerce, business owners, the press, and most of all, the companies' employees have been (mis)led to believe that our decision approving this transaction guarantees that Calvert Cliffs 3 will be built."

It said later in the report: "So why the confusion? Because as soon as this case entered Phase II, the companies undertook an extensive and expensive public relations campaign designed to elicit support for the transaction on the ground that Maryland will benefit from the development of Calvert Cliffs 3. The full-page newspaper ads may not have promised explicitly that UniStar will build the plant if we approve this transaction. But the orchestrated parade of company employees, public officials and union leaders who appeared at our evening hearings connected those dots, and quite clearly believed that our apporoval of this transaction would deliver the jobs and economic development benefits they want."

It also said that under the current regulations, UniStar would bear all the financial risks of building Calvert Cliffs 3.

In a written statement, EDF said:

Through its investment in Constellation Energy’s nuclear business, EDF has chosen Maryland to be at the center of its growth efforts in the United States. EDF is eager to be a strong corporate citizen in Maryland, and looks forward to moving its U.S. headquarters to the State.