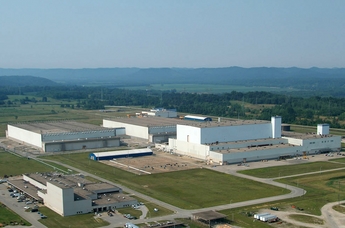 USEC Inc has said that although it is restarting a demonstration cascade at the American Centrifuge plant in Piketon, Ohio, it has not reversed the decision taken in August to demobilise the proposed uranium enrichment plant. It also said that the plant still needs a government loan guarantee to be built. It is expecting to file the delayed application in early 2010.

"Although we were disappointed with DOE's decision in August to delay final review of our application, we still believe that our investment in the American Centrifuge technology and plant is a path to long-term value for our shareholders. We are sharply focused on resolving the concerns DOE has raised," said John K. Welch, USEC president and chief executive officer.

"Following our review of machine assembly quality assurance procedures, we have reassembled about a dozen AC100 centrifuges and incorporated updated components. We have 10 of these machines installed and spinning at the America Centrifuge Plant and expect to have about two dozen machines reassembled by the end of this month. We anticipate operating these commercial, production-ready AC100 machines in our Lead Cascade test program in early 2010," Welch said.

"DOE officials have told us they want to see the project succeed for a number of policy reasons. The independent engineer's report on our project prepared for DOE provides us with guidelines for technical and financial improvements that need to be made. We have met with DOE officials and will be presenting a plan to meet all of their technical and reliability concerns. These concerns will be addressed before we update our application to the Loan Guarantee Program," he said.

"A substantial portion of our recent effort has been to focus on ways to mitigate cost risk for the project and the company's ability to manage that risk, which includes our strategic alternatives," Welch said. "It is our plan to present a revised and improved financial structure as part of our updated submission to DOE."

On August 4, 2009, DOE and USEC announced an agreement to delay a final review of our loan guarantee application for the ACP until at least early 2010. As a result, USEC began to demobilize the American Centrifuge project in order to preserve liquidity as we evaluate the strategic options for the future of the project. In parallel, we are continuing American Centrifuge demonstration activities, evaluating how best to configure the project on a go-forward basis, and seeking to reduce technical and financial risk for the project, the company said.

Since August, over 1,300 project jobs have been lost as a result of demobilization, including approximately 120 jobs at USEC and the remainder from direct jobs at our suppliers. Several thousand indirect jobs have also been affected. Job losses have occurred in eight states, with Ohio and Tennessee having the largest job losses.

Construction work on the plant infrastructure and finalizing the balance-of-plant design ceased in August. The plant design work is approximately 80 percent complete and would resume following a decision to remobilize the project. Because we have delayed high-volume machine manufacturing, work at all of our strategic suppliers has been sharply reduced.

USEC continues its lead cascade testing program in Piketon, Ohio. The prototype centrifuges operating there for more than two years have accumulated approximately 275,000 machine hours. Data from this testing program has provided valuable assembly, operating and maintenance information, as well as operations experience for the American Centrifuge staff. The prototype machines continue to operate. During the quarter ended September 30, 2009, we determined that at least some of our production centrifuge machines, which we call the AC100 design, that were being prepared for Lead Cascade testing were not assembled in full compliance with the specified drawings and procedures. We disassembled these machines and have begun reassembling the machines with improved components that were incorporated in the design finalized earlier this year. These enhanced machines are production-ready and would be deployed in the commercial plant. We subsequently enhanced procedures to ensure compliance with our quality assurance program for centrifuge components manufacturing and assembly. Ten of these machines are operating individually and we expect to restart Lead Cascade testing of approximately two dozen AC100 machines in early 2010, the company said.

USEC's spending plan going forward for the project is still being developed. In the first nine months of 2009, our spend rate on the project was approximately $45 million per month. We expect to substantially reduce that spending level. We do not expect to see the full impact of these reductions from project demobilization until the fourth quarter and beyond. As noted in our revised 2009 outlook, advanced technology expense in 2009 is expected to be in a range of $115 to $120 million, as advanced technology expense declines in the fourth quarter, reflecting the demobilization of building the American Centrifuge Plant and ongoing centrifuge lead cascade and related demonstration activities. We expect to set a spending level for the project for the next several months that will vary depending on available funds. DOE previously committed to provide $45 million to USEC over 18 months (with $30 million of that in Federal government fiscal year 2010) to support ongoing American Centrifuge technology demonstration activities. However, Congress did not provide the $30 million in funding for this activity in the recently completed Federal government fiscal 2010 energy and water appropriations conference report, and DOE in an October 15, 2009, press release stated that it does not see a path to providing the $30 million in funding at this time. USEC plans to work with DOE and Congress on alternative approaches for obtaining this funding, but the availability and timing of this funding are uncertain and consequently this impacts the amount we have available to spend on the project, the company said.

As we seek the most cost-effective deployment plan, we are evaluating the scope and scale of the plant, the deployment of machines over a longer time period, alternate financing structures, and the cost and feasibility of remobilizing at a later date. Based on the results of this evaluation of our strategic options for the future of the project, or in the event of a further delay, or a decrease in the likelihood of obtaining DOE loan guarantee funding, or for other reasons, we may reduce spending and staffing on the project even further or might be forced to take other actions, including terminating the project.

Our efforts to continue deployment of the ACP remain subject to the uncertainty of our ability to obtain a DOE loan guarantee as well as the other risks related to the deployment of the ACP described in our Annual Report on Form 10-K and subsequent quarterly reports on Form 10-Q.  Areva, a company majority owned by the French government, also applied to the Loan Guarantee Program for a plant it has proposed to build in Idaho. Areva's application is also being considered by DOE, which could affect our likelihood of obtaining a loan guarantee.

In addition to ACP spending through year end, we are working with suppliers to reduce any incremental exposure for additional payments. That total exposure is currently estimated to be between $65 and $75 million at December 31, 2009. That amount includes anticipated payments for materials to be delivered, as well as contract termination exposure. The termination exposure is a function of timing, project schedule and any modifications to work scope. This estimate could be affected by ongoing discussions with suppliers.

Our near-term goals for the American Centrifuge project continue to include the following:

Successful start up of the AC100 Lead Cascade testing program in early 2010 using the upgraded production machines to improve DOE's confidence in the machines' reliability through consistent operation.

Continue development efforts to further improve reliability of the AC100, increase the machine's productivity as measured by SWU output and lower its capital cost per SWU through value engineering.

Reduce perceived project risk and take other steps to improve our financial structure.

Negotiate contracts with suppliers that can provide greater certainty of cost and schedule and develop a revised project plan.

Continue working with customers to enter into additional long-term contracts to build on the $3.4 billion in committed sales for the output from the ACP.

External weblinksNuclear Engineering International is not responsible for the content of external internet sites.Begin the survey
Post to: