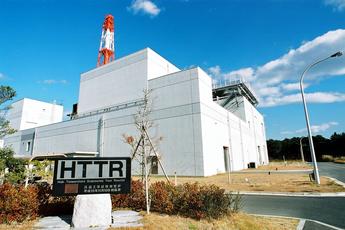 Japan's Nuclear Regulation Authority (NRA) has issued a draft report on the High-Temperature Engineering Test Reactor (HTTR), which confirms it is "effectively compatible" with the new regulatory standards, according to the Japan Atomic Industrial Forum (JAIF).

Heat produced by the HTTR is expected to be used for a range of purposes, including hydrogen production, power generation, and seawater desalination.

In November 2014, JAEA applied to the NRA for inspections to verify whether measures taken at the reactor meet revised nuclear safety regulations announced in July 2013. These new standards set out requirements for plants to respond to a variety of natural phenomena and mitigate the effects of severe accidents.

In its draft report, NRA said that JAEA took uncertainties into consideration with respect to  the reactor’s location and structure.

The reactor is located on high ground, some 36m above sea level with no seawater intake facilty, "thus the examination concluded that there was not any risk of safety functions being lost due to a tsunami," JAIF reported.

"It determined that concentration levels would not be high enough for it to burn if graphite,used in the reactor as a structural material, would oxidize and carbon monoxide were generated," JAIF said.

"JAEA also concluded that sealing the reactor building would alleviate the impact of released radioactive materials if the reactor containment vessel lost function. The NRA then confirmed that the various measures and systems put in place would prevent expansion of effects, even if multiple accidents occurred," it added.

The report will be open to public comment. It will be finalised after being referred to JAEC and Japan's Ministry of Economy, Trade and Industry (METI).