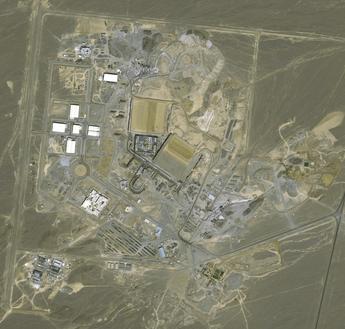 Foreign ministers from Britain, France and Germany (the EU3) will meet on 11 January to discuss referring Iran to the UN security council over its defiant insistence on researching uranium enrichment.

On 10 January Iranian officials removed IAEA seals on equipment at the Natanz site, ending a voluntary suspension of enrichment activities that began in October 2003. IAEA inspectors were present when the seals were removed, but the exact nature of the un-sealed equipment remains a matter of confidence.

Iran’s statement to the IAEA said it would not actually enrich uranium. Mohammad Saeedi, deputy head of the Atomic Energy Organization of Iran told the press: "What we resume is merely in the field of research, not more than that," adding: "Production of nuclear fuel remains suspended." As part of the research, uranium hexafluoride would be fed into centrifuge cascades. The IAEA’s director general Mohamed ElBaradei expressed “serious concern” at the development.

Iran has been found in breach of its obligations under the Nuclear Non-Proliferation Treaty and would likely suffer economic sanctions if referred to the security council. The USA has supported referral for many months and only patient negotiation from the EU3 and Russia has delayed such a move.

But now, European patience has worn thin. Jack Straw, the British foreign secretary, said: “There was no good reason why Iran should have taken this step if its intentions are truly peaceful and it wanted to resolve longstanding international concerns” while his German counterpart, Frank-Walter Steinmeier, openly wondered if there was any basis left for Iran-EU3 talks. A ministerial trip to Iran planned for 18 January now looks in serious jeopardy.

President Jacques Chirac of France, warned that Iran would be making a serious mistake if it ignored the international community on its nuclear programme. The longstanding American opinion, as put by White House spokesman Scott McCellan, is: "If the regime in Iran continues on the current course and fails to abide by its international obligations, there is no other choice but to refer the matter to the security council."