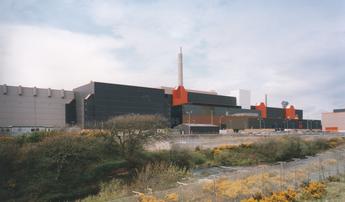 British Nuclear Group (BNG) has completed its board of enquiry report into the pipe leakage incident at Sellafield’s Thermal Oxide Reprocessing Plant (Thorp). According to a BNG statement, the pipe may have been failing for four months before the escape of significant amounts of liquor in January. BNG noted abnormal plant indicators and shutdown the plant on 18 April.

The report has been passed to Sellafield’s owner, the freshly formed Nuclear Decommissioning Authority (NDA).

On 22 April, BNG reported that a pipe had failed in one of the heavily shielded cells, known as the feed clarification cell, in the Thorp Head End plant. This resulted in about 83m3 of nitric acid containing dissolved nuclear fuel leaking into a secondary containment vessel, a large stainless steel-lined concrete cell fitted with systems to pump liquid from its floor. BNG said the secondary containment worked as planned, there was no release to the environment or additional exposure to personnel.

The investigation found that the pipe failed due to metal fatigue caused by stresses arising from the fact that the pipe was attached to a suspended tank for the purposes of weighing the tank's contents. The pipe may have started to fail in August 2004 after changes were made to the restraint mechanism of the suspended tanks which allowed greater than anticipated stresses to be exerted on pipework. Failure of the pipe was believed to have occurred in mid January 2005 at which point significant amounts of liquor would have begun to escape into the cell.

BNG admitted that opportunities which could have shown that material was escaping (such as cell sampling and level measurements) were missed. A statement said that while the failure could not have been prevented at this stage, had these opportunities been taken the quantity of liquid released could have been significantly reduced.

Barry Snelson, managing director of Sellafield said: “I am disappointed that plant indicators were not acted upon as quickly as they should have been and I shall be taking action to ensure that any complacency with respect to acting upon plant information is addressed.”

NEI understands the timeline of post-leak events as follows: Thorp was shutdown following the realisation that material was unaccounted for on 18 April; by 19 April BNG had traced the problem using CCTV; on 20 April at 5:00pm, BNG informed an officer from the Nuclear Installations Inspectorate (NII) who was on site at the time. An NII spokesman confirmed that site licensees must inform the regulator of incidents as soon as reasonably practicable.

BNG said that it is using the cell’s installed steam ejectors to lift the liquor from the cell floor and divert it back into a process vessel. Snelson commented: “From the information we have available at this stage we are confident that we have the capability of returning Thorp to service.”

The NII is conducting a separate investigation.