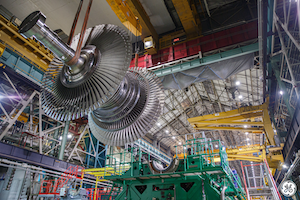 GE and EDF have signed an exclusive agreement for EDF to acquire part of GE Steam Power’s nuclear power activities.

"This plan to acquire part of GE Steam Power’s nuclear activities including the Arabelle turbine will enable EDF to strengthen its key technologies and skills for the nuclear fleet in operation and for new nuclear projects in France and worldwide,” noted Jean-Bernard Lévy, chairman and chief executive officer of EDF.

GE Steam Power’s nuclear steam turbines are currently installed in half of the world's nuclear power plants, including in all of EDF’s nuclear plants in France.

The proposed transaction includes GE Steam Power’s conventional island equipment for new nuclear plants — including the Arabelle turbine, as well as maintenance and upgrades for existing nuclear power plants. The transaction would also include steam turbine technology for future nuclear plants, like the next generation of European pressurized reactors (EPR2) and small modular reactors (SMR).

GE said it would retain a services-focused Steam Power business and continue to provide services for more than 100GW of nuclear turbine islands in the Americas region. It also retains GE Hitachi Nuclear Energy, a leading lifecycle provider for reactor islands, which will deploy Canada's first commercial, grid-scale SMR.

GE said it "remains committed to the nuclear sector and continues to invest in next-generation technology, which plays an important role in today’s energy transition."

The nuclear activities and teams in scope of the proposed transaction are based in about fifteen countries, with nearly 70% of the workforce in France, including at GE Steam Power manufacturing sites like Belfort and La Courneuve.

“This plan supports GE’s efforts to focus our portfolio to be a best-in-class services partner to our Steam Power customers through the energy transition. Nuclear plays an important role in the energy transition, and GE will continue to support the industry through servicing our nuclear steam turbine fleet in the Americas as well as through GE Hitachi Nuclear Energy’s nuclear reactors, fuels, and services, including our SMR technology,” said GE Chairman and CEO H. Lawrence Culp, Jr.

The proposed transaction is subject to consultation with employee representatives and other customary closing conditions, including regulatory requirements. The transaction is expected to close in the first half of 2023, a statement said.