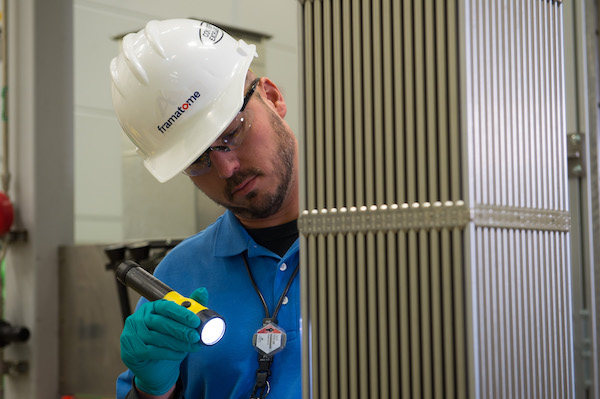 Developed with funding from the US Department of Energy (DOE) under Framatome’s PROtect programme, the lead fuel assembly (LFA) containing 176 chromium-coated rods and chromia-enhanced pellets, was loaded during the plant’s spring refueling outage.

It was manufacted at Framatome's manufacturing facility in Richland, Washington.

“Loading the first complete accident tolerant fuel assembly is a huge milestone for Framatome and the nuclear energy industry,” said Lionel Gaiffe, senior executive vice president of the Fuel Business Unit at Framatome. “This is the next step in our PROtect programme and further demonstrates our commitment to advancing nuclear fuel technology by offering more efficient and reliable solutions to support the production of low-carbon energy.”

The first complete fuel assembly builds on previous work that included completing an 18-month fuel cycle test on LFA in the US  and Switzerland, Framatome said.

Framatome says its PROtect ATF chromium-coated cladding and chromia-enhanced pellets are more tolerant to changes in reactor core temperatures increasing coping time, while reducing corrosion and the production of hydrogen under high-temperature conditions.

Calvert Cliffs is one of the 12 nuclear faciliites operated by US-based Exelon Generation, which has a fleet of 21 nuclear reactors (18.7GW) at sites in Illinois, Maryland, New York and Pennsylvania.