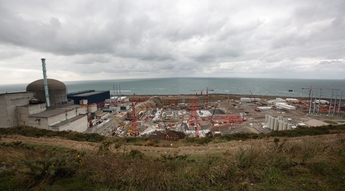 EDF has begun construction of the 1650MWe Flamanville 3 EPR in Normandy, France.

More than a day’s continuous pouring of over 10,000t of concrete was required for the first part of the floor slab of the future reactor building.

French firm Bouygues are providing civil engineering skills, while Areva is to supply the reactor and Alstom the turbine generator.

Preparatory work began in summer 2006, and construction is expected to last for 54 months until the reactor is brought into service in 2012.

Some 700 people currently work on the site, which will rise to more than 2000 at the height of its activity.

Pierre Gadonneix, chairman and chief executive of EDF Group, said: “The start of the construction of the nuclear block is a major step in the creation of the EPR at Flamanville. The experience, expertise and knowledge of the EDF teams, in particular their skill in the construction works and engineering, have allowed the construction to stick strictly to schedule.

“The success of the Flamanville site is essential and will benefit the whole French nuclear industry, since this technology is currently recognised as an innovative, safe and competitive solution throughout the world.”

Flamanville currently consists of two 1382MWe PWRs which began commercial operations in 1986 and 1987.