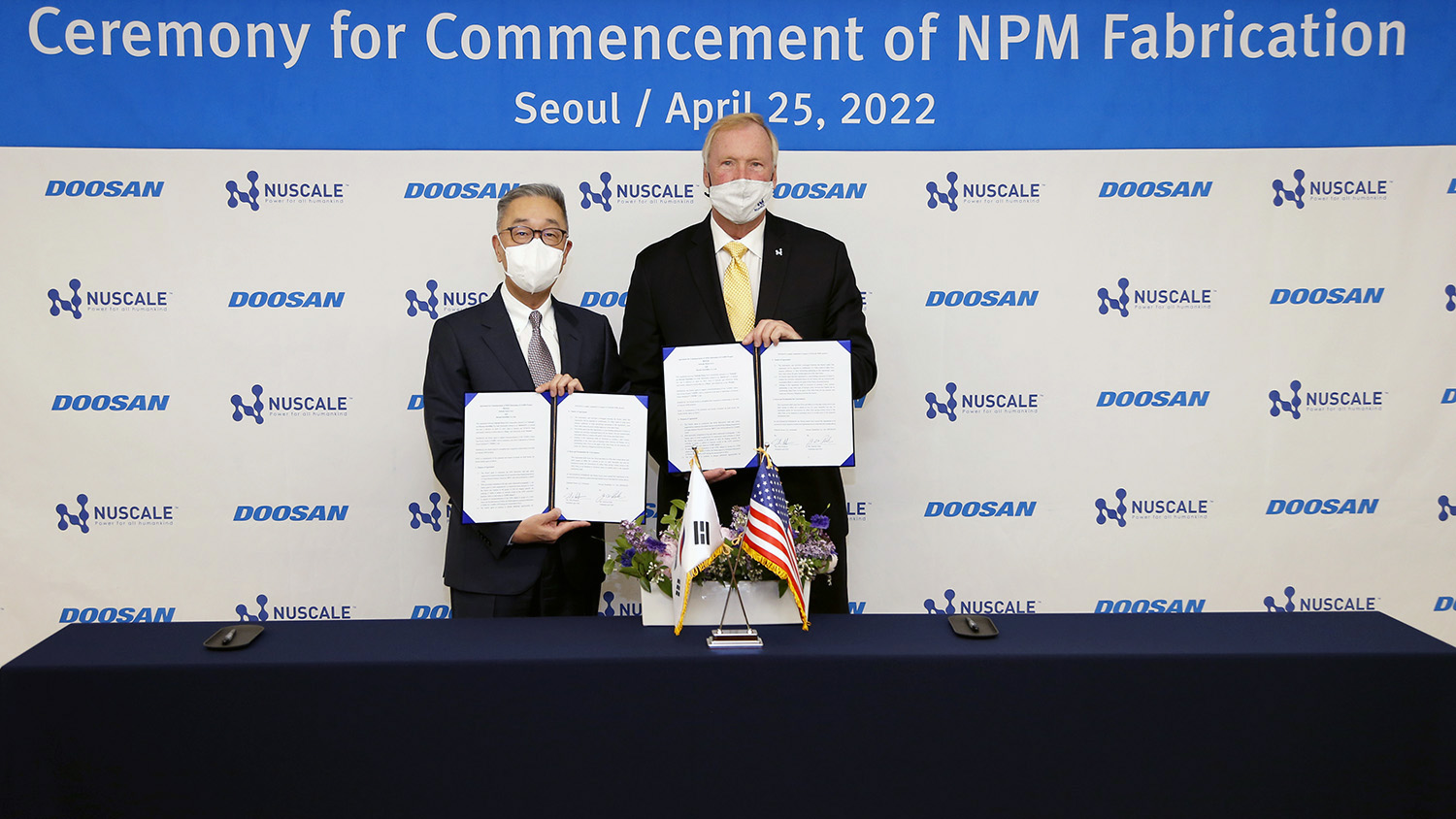 US-based NuScale Power and South Korea’s Doosan Enerbility Co on 25 April announced through a signed agreement that Doosan will begin production of forging materials for NuScale’s Small Modular Reactors (SMRs) this year, with expectations for full-scale equipment manufacturing by the latter half of 2023. Specifically, Doosan, a Korean industrials and energy company, will begin production of forging dies for NuScale’s Upper Reactor Pressure Vessel, marking the start of NuScale Power Module (NPM) production.

We expect that the materials produced will support NuScale’s first commercial deployment of its VOYGR power plant for Utah Associated Municipal Power Systems’ (UAMPS') Carbon Free Power Project (CFPP) at the Idaho National Lab (INL), the companies said. In conjunction with Doosan, US-based suppliers and others, NuScale and the CFPP expect to bring nuclear energy to UAMPS customers by the end of the decade.

Doosan completed a manufacturability review for the NPM in January 2021, which successfully established the manufacturing sequence and processes for the NPMs. Doosan is now working on NPM component prototype development. With this new agreement, Doosan will begin manufacturing of large forged materials used for NuScale’s SMRs in 2022 and expects to begin full-scale manufacturing of NPMs in the second half of 2023.

This builds upon NuScale and Doosan’s existing relationship, which began in 2019 when Doosan made its initial investment in NuScale. Since then, Doosan has conducted an extensive multi-year effort, completing the design for manufacture of the NPM and performing manufacturing trials to reduce schedule risk and increase cost certainty.

The NPM is a small, safe, pressurised water reactor that can generate 77MWe of electricity and can be scaled to meet customer needs. The VOYGR-12 power plant is capable of generating 924MWe, and NuScale also offers four-module VOYGR-4 (308MWe) and six-module VOYGR-6 (462MWe) plants and other configurations based on customer needs. The majority investor in NuScale is Fluor Corporation, a global engineering, procurement, and construction company with more than 70 years supporting nuclear projects.

The following day, on 26 April, NuScale Power signed a Memorandum of Understanding (MOU) with its partners, Samsung C&T Corporation, Doosan Enerbility Co, and GS Energy Corporation to explore the deployment of NuScale’s VOYGR power plants. NuScale said this is a critical next step in bringing NuScale’s energy solution to Asia.

The MOU builds upon a series of investments made by the three companies starting in 2019, and then again in June and July of 2021. As part of the MOU, the companies will explore jointly studying, planning, and developing deployment of VOYGR power plants in specific locations where mutually agreed.

“I believe that the world today is in dire need of SMR deployment to respond to the global climate crisis and to reach net-zero,” said Yongsoo Huh, GS Energy President and Chief Executive Officer. “NuScale is the leader of SMR with unparalleled level of maturity in technology and design, and the Korean partners also bring their own excellence in the fields of manufacturing, construction, and operations of power plants.”

“This MOU will serve as a cornerstone of expanding SMR business in cooperation between NuScale and Korean strategic investors, and I expect the cooperation between Korea and the United States in the nuclear business will be strengthened through this MOU,” said Kiyong Na, Chief Executive Officer of Doosan Enerbility Nuclear Business Group.

“With this MOU, it is expected that there will be great progress in SMR business development through stronger cooperation between NuScale and Korean strategic investors”, said Byungsoo Lee, Vice President of Samsung C&T. “I think SMRs will play an important role to respond to the demand of carbon-free and climate change.”