Joe Christie, Jamie Bain and Sue Thompson explain how 1810 litres of radioactive sodium coolant was removed from a shallow ‘heel’ pool at the base of Dounreay’s Prototype Fast Reactor

Dounreay is the second largest civil nuclear site in the UK, located 110 miles north of Inverness on Scotland’s Atlantic Ocean. Once it was the focal point of the UK’s fast breeder reactor research and development programme. Nuclear research ceased in the 1990s and Dounreay is now internationally recognised as one of the world’s most complex nuclear site closure projects. Its collection of reactors, fuel plants, laboratories and waste facilities are all at different stages of decommissioning.

Removing 1810 litres of radioactive sodium coolant from a shallow ‘heel’ pool at the base of the Prototype Fast Reactor (PFR) reactor vessel, after most of the sodium coolant had been removed, is an example of the decommissioning challenges that the workforce faces.

Removing the remnant sodium from the base of the reactor was an important stage in decommissioning PFR.

Safety studies indicated that the pool had to be reduced to less than 150kg before the water vapour nitrogen (WVN) treatment could be applied the reactor vessel. This presented many engineering challenges. The most obvious was the fact that the sodium was in a solid state across the base of the vessel, with no means of re-melting it, and was located in an area which was very difficult to access with pumping equipment.

The first challenge was to design and install a means of melting the sodium so it could be pumped out. The approach was to design, manufacture and install 11 external heating arrays, each with six petals containing ceramic heaters. These were installed in contact with the reactor vessel through holes drilled through the vessel leak jacket and deployed in a manner similar to opening an umbrella. The design allowed sufficient sprung force to provide hard contact with the underside of the vessel for good thermal conductivity and heat transfer.

The DSRL project team worked closely with the supply chain to develop this technical solution. The petal heaters were designed in-house and manufactured locally in Caithness by JGC Engineering and Technical Services Ltd.

The early design was trialled using a life size representation of a section of the curved vessel base, a replica deployment sleeve and a heater array. The array was shown to be capable of delivering temperatures around 750 degrees Celsius. The trials greatly informed development of the final design of 11 arrays, which successfully re-melted the sodium at a contact temperature of 600 degrees Celsius.

The second challenge was to design an in-reactor pump that was remotely manoeuvrable to negotiate numerous obstacles and to reach the sodium pool. The pump would have to pump the molten sodium from the shallow pool, leaving no more than 150kg.

A flat-faced suction head was designed and trialled that could pump the shallow pool, while external filters were a safeguard against any anticipated debris in the base of the vessel. The heel pool pump was designed in-house, and fabricated locally by Gows Lybster Ltd, which also manufactured a shielded tank into which the sodium was transferred. The control system for the pumping system and tank was manufactured by another local contractor, Contec Design Services. The tank support frame was manufactured by Forsyths and the site-specific structural calculations were completed by Arch Henderson.

Full scale pumping trials demonstrated that the design would pump molten sodium and the entrained gas expected when pumping out such a shallow pool. Years before, a similar pump had successfully removed the bulk molten sodium from the vessel, so it was agreed that this design of in-reactor pump would again be used. It had engineering improvements, particularly relating to steering via remote control, to reach the pool.

No full trial ‘mock-up’ of the final manufactured design of the umbilical and deployment route was undertaken in the design process, because the previous pump had been successfully deployed and subsequent work used remotely operated cameras to reach and inspect the pool.

As the system had to be deployed into the reactor, which is under an inert atmosphere, it was deployed via a containment system — a custom-built glovebag — to maintain the inert atmosphere and prevent the release of radioactive contamination.

In early attempts to deploy the new in-reactor pump, with its umbilical, down into the vessel and onto the sodium pool, the umbilical was found to be incapable of reaching it. The remote steering and control system did not function as expected due to the steel control cable becoming jammed. There were also inadequate independent control of the pump suction head on the end of the umbilical. The jammed cable compressed the umbilical, which shortened the overall length, and repeated failed attempts to manoeuvre in this state led to the deformation of the leading end of the pump suction head.

The deployment route and the remote steering control system had to be redesigned, taking account of the issues, and fully trialled to ensure the future successful redeployment of the system.

The project team — including the project management, engineering, commissioning and operations team members — all contributed to an extensive redesign of the steering and control system. The work continued through the coronavirus pandemic, with the team following ‘COVID-19-safe’ ways of working to keep themselves and their colleagues protected.

The redesign had larger diameter wheels on the camera housing, a modified pump cover and improved rigidity of the two sodium suction hoses and suction head alignment, while maintaining some flexibility to manoeuvre. The control cables had an inner and outer cable to eliminate the friction and jamming that had been experienced during the initial unsuccessful deployment.

Using an onsite, purpose-built training rig and overhead crane, a full-scale mock-up of the reactor vessel and components was designed, manufactured and installed to replicate the pump deployment route. An identical pump umbilical assembly and components, 25m long, was manufactured and assembled to replicate the in-reactor pump with the new redesigned steering and control system attached.

Deployment trials went through a rigorous site acceptance test process, with minor modifications required to enhance the new steering and control system. Improved CCTV cameras installed on the pump assembly provided the required visibility for both the remote deployment and the trialling of the mock-up assembly, which proved successful in reaching the required position and provided the necessary training for the project team.

The mock-up pump assembly was then lifted and removed from the trials and training rig and transferred to a purpose-designed and built supported glovebag. This would mimic, on the reactor top, the environment where the actual pump would be located. Modification work on the actual pump umbilical was undertaken here, after the pump was removed from the reactor. Wheeled trolleys were trialled to transfer the pump umbilical into the supported glovebag, to reduce radiation dose to operations staff while the required modifications were completed

The newly designed steering and control components were successfully installed, working through the supported glovebag, which provided the operators with the training required to perfect the practical implementation of the repairs. It also helped optimise management of health and safety considerations.

After the trials and testing phase was complete, the supported glovebag was dismantled, transferred to the reactor top and installed, ready to receive the in-reactor pump umbilical and allow repair and modifications to begin.

The pump umbilical was removed from the reactor and transferred to the supported glovebag. The new steering and control system was installed while maintaining an inert atmosphere and radiological containment throughout. After thorough operational and commissioning checks, the umbilical was redeployed into the reactor vessel using the new control cables and CCTV cameras, and manoeuvred through a challenging route, negotiating 90 degree and
180 degree bends and other obstacles to reach the sodium heel pool.

The sodium was then heated to approximately 150 degrees Celsius, where it was seen to remelt, in preparation for the transfer. The molten sodium was pumped from the reactor vessel via the trace heated transfer route to the purpose-designed sodium receipt vessel for interim storage. The sodium transfer took less than 24 hours to complete.

Removing the sodium heel pool removed a major obstacle to the next stage of reactor decommissioning — WVN treatment of the remaining sodium residues.

A combination of complex problem-solving, innovation, collaboration with contractors, trials and training were key to the success of the project and paves the way for the next step in the decommissioning of PFR.

The next phase will be to decommission and remove the pump from the reactor and install the treatment system, which will use a water/vapour/nitrogen gaseous mixture, using purpose-built skids, to react all the remaining sodium residues within the vessel and pipework. The project is on course to complete the clean-out work by the end of 2023.

Removal of the heel pool demonstrated how innovation and determination can allow deployment of remote systems into high radiation areas through complex geometry, while maintaining containment and minimising radiation dose to the operators.

In its application this is a world first, but the techniques could equally be deployed to other remote decommissioning tasks on fast reactors and other complex geometry systems.

The bottom of the reactor vessel with the petal heaters installed (Photo credit: DSRL) 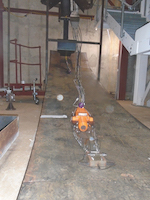 The mock up heel pool pump and camera during trials (Photo credit: DSRL)

The mock up pump negotiating the mock up rotor spokes (Photo credit: DSRL)

The heel pool pump inside its glovebag (Photo credit: DSRL)