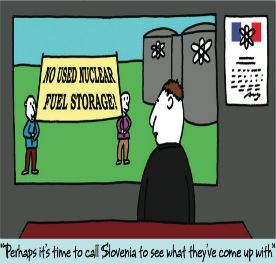 Nuclear waste is typically treated as a sovereign responsibility. Does it have to be? Jeremy Gordon suggests that like any other segment of the industry, radioactive waste management should be treated as a business opportunity.

For this industry, waste has become a mothership of an issue. It moves slowly, spitting out smaller issues as it goes – issues that range from doubts about the competence and goodwill of the industry to the dread of radiation and the spooky biological fears about what it might do to the natural world, even in the distant future when human beings are long dead and gone.

But when society talks about radioactive waste, all it has in mind is the 1% made up by the used nuclear fuel, and not the rest that the nuclear fuel cycle produces.

We might wonder how this tiny fraction of what is already a small amount of waste has come to be seen as such a huge issue, especially when it is so well funded and managed that it has never caused a health or environmental issue. The answer is that it has been treated with so much reverence as part of an interlocking set of behaviours that give credibility to the idea that it is truly extraordinary.

An unfortunate truth from the history of nuclear energy is that quite a lot of wastes were not dealt with properly. Just think of leaking single-walled tanks at Hanford, the ‘disposal shaft’ at Dounreay or dumping at sea. The costs of those mistakes are in extra decommissioning charges and penalty points on our social licence that cause lingering doubt about our social responsibility.

So, disposing of wastes without proper consideration was bad, and we do not do that anymore. Instead, we keep it all bottled up. This neatly shows its comparative advantages compared to other wastes - that the volume is small enough to do so, the money is available and even holding on to it in its entirety has not proven too technically challenging.

But in the context of history, the practice of holding on to waste for decades gives credence to the idea that industry would prefer to simply dump it in the sea, and that the only reason we don’t is that we are not allowed to. Furthermore, it suggests we are stumped as to what to do with it. In the mind of any rational observer, when even the best nuclear scientists cannot apparently figure out a way to get rid of it, this stuff must truly be weird and dangerous.

It is, of course, unnatural for any organism to hold on to its wastes. Everything in nature, as well as every industry and every company, exists in a continuous process of taking in resources before giving out some kind of product along with some waste or exhaust. One part of the cycle leads to another, and you can’t breathe in without breathing out. But the nuclear industry has gone against this natural law for 60 years. We should not be surprised that the public’s intuition tells them something weird must be going on behind the scenes, and this will inevitably become apparent at some point in the future.

Radiation itself already inspires a lot of people to be wary of strange biological consequences, despite endless evidence to the contrary. We have been stuck with that imagery since early radiation scientists said over 100 years ago that this new form of energy was an elixir of life that could make crops grow bigger.

Factoring in these uncanny biological fears, it is easy to see how disposal of a relatively small amount of a solid substance like used fuel can become a big health and safety issue. For the health of the nuclear industry and to alleviate this depressive factor on public opinion, it is urgent that we get on with the job of disposing of backed-up used nuclear fuel.

Note that disposal of low-level waste proceeds routinely all over the world without outsize attention from the public. I believe this is only partly because the radioactivity is that much lower, and much more because it is an ongoing practice and not a science project for the future.

Before used-fuel disposal takes place, we face some extra barriers of specialness. Chief among them is that the world has decided that each country must maintain 100% sovereign control of its radioactive wastes, which demands each country develops a boutique solution for its wastes and its wastes only. That means 31 separate used fuel disposal programmes, albeit with lots of cooperation and exchange of information, but with no real consolidation in actually doing the disposal. It is extremely inefficient when you consider a country like Slovenia, with one PWR, has to solve this problem with the same rigour as France has to do for its fleet of 58 (and its 12 closed reactors).

But there’s more. What is the plan for disposal? Each country will independently design and engineer a one-off facility unlike anything else they have ever built (save perhaps bunkers designed to survive a nuclear war) and put the stuff 400 metres underground in solid rock. Of course, this extreme approach simply adds more layers of specialness to the issue.

Meanwhile, the framework to proceed has to be laid out and overseen by politicians who, frankly, would rather not. It all represents more layers of specialness and seriousness that reinforce the feelings of unnatural weirdness I have already discussed. It’s hard to imagine a more impractical and inefficient set-up, and it is no wonder opponents of nuclear energy insist the waste is disposed of before any new reactors are built – they know we have made it almost impossible for ourselves.

The brightest rays of light in this scene come from those countries bold enough to set their own rules and forget about the global system.

Always innovative, Russia has shown leadership in an area that really counts - newcomer countries. What a headache used fuel disposal must seem to those bringing in nuclear power for the first time. What a relief it is then that choosing a Russian-design reactor means fuel take-back can be part of the deal, as Bangladesh has signed for and Turkey would like to.

In previous decades other vendor countries might have offered this service. Taking the commercial route even further was the game-changing proposal from South Australia in 2016 to create a large dry storage site for overseas used fuel and, over time, develop a deep repository for final disposal. All this for a fee – and probably a high one. Unfortunately, this idea stalled in a process of public consultation and the scheme remains shelved, although not forgotten.

The contrast is incredible. Under some management approaches, used fuel disposal is an expensive and embarrassing millstone; but under others it becomes a world-leading business opportunity. There are hundreds of billions of dollars set aside for used fuel disposal around the world, with most government programmes taking a long time to achieve extremely little – yet only South Australia has the initiative to try to create an actual disposal service.

Finland and Sweden have adopted an approach that beats the norm in four ways.

First, the destiny of the waste is decided by the companies that created it and own it, and the programmes are managed and paid for by them through specialist companies.

Second, governments have a vastly smaller role, and individual politicians smaller still. It has never been in the gift of politicians to say yes or no, to authorise investments or to stop or start programmes. The worst that Swedish governments have been able to do when seized by anti-nuclear instincts is to raise the rate at which money should be collected to pay for the disposal. Annoying for sure, but they could never have killed the programme stone dead as US President Barack Obama did to the US waste site at Yucca Mountain through Nuclear Regulatory Commission chairman Gregory Jaczko.

Third, there is full-scale technological cooperation between Finland and Sweden’s waste companies (Posiva and SKB, respectively). Why spend money developing independent systems to do the same job, they asked themselves wisely many years ago. We should hope they one day offer their siting and disposal expertise alongside the commercial market of interim dry storage solutions doing strong trade around the world.

Fourth, although their disposal facilities remain special as deep underground systems of tunnels, siting and construction are managed by the disposal companies and regulated independently by the authorities – because, like low-level waste disposal elsewhere, they are an industrial commercial activity, not a boondoggle.

The progress being made is slow and steady, but get there they will. First disposal is planned for Finland in 2023, and I can’t wait.

When used fuel disposal is an ongoing part of the fuel cycle, and uranium completes its journey by returning to the ground, both the industry and the public can breathe a collective sigh of relief as the special strangeness of radioactive waste diminishes permanently.