The white heat of optimism 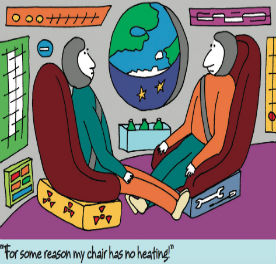 Jeremy Gordon calls for the industry to embrace the optimism generated by nuclear energy’s applications in space, and also by unlikely technologies such as thorium, fusion, and molten salt reactors.

Who among us has never wanted to be an astronaut?

We would-be space explorers know that radiation trapped inside a dense material will cause tiny vibrations that heat it up.

Combined with the voltage produced by thermocouples, this effect has been used for a long time to make radioisotope power systems with no moving parts that keep the juice flowing for decades. These are nuclear batteries and they have been used on land, at sea and in space.

Several such power units are at the moment journeying beyond solar system and into interplanetary space aboard the Pioneer 10, Pioneer 11, Voyager 1 and Voyager 2 probes. Incredibly, Voyager 2 is still making scientific measurements and beaming them back to Earth. New Horizons is heading for the outer solar system, having shown the world that when you get close enough to Pluto to capture more than a few pixels what swims into view is an astonishing little world of ice mountains, and deep red plains with a striking feature in the shape of a heart. Less pretty was Ultima- Thule, which the NASA team was able to direct the craft towards for another photo opportunity. I wonder if New Horizons can surprise us one more time while it still has power.

Closer to home, Cassini sent thousands of images back from the solar system’s most beautiful world, Saturn, over almost 20 years, while Curiosity will be feeding our hopes and dreams for Mars over many years to come.

For the European Space Agency’s Rosetta mission the story was a little different, with no nuclear battery. It managed a thrilling approach and close orbit of a comet, but the Philae lander failed to grip the surface and bounced into a shadow, where it lost solar power after about 60 hours. If it wasn’t for what the European Space Agency team leader called ‘political reasons’, the Agency would have had the technology and the courage to use a nuclear battery that could have kept the lander going for its full seven months. As the big ball of ice transformed into a streaming comet we would have witnessed the entire process from its surface.

So it is a massive breakthrough that in May the UK’s National Nuclear Laboratory (NNL) announced a new way to make a nuclear battery for space missions. Instead of using plutonium, NNL used americium extracted from UK plutonium stocks, bypassing not only the political problem that weakened Philae, but also the issue there is no ready supply of the plutonium isotopes needed for future space missions because it is not mass produced any more.

ESA spokesperson Keith Stephenson said that the collaboration between the nuclear and space sectors has created a brand-new capability for Europe, and “opens the door to a future of ambitious and exciting exploration of our solar system.”

The kind of admiration we have for space scientists and our collective wonder at their achievements has a become rare thing in society. Their work and the concepts they deal with can still tap the shrinking public well of positivity over big ideas and a bright future.

“We define ourselves by our big ideas”, said NNL’s video, although for many of us now that could mean preventing climate change and reversing environmental degradation, rather than exploring the universe.

For many people with a general interest in science and technology the successes of nuclear energy in space have been something of a ‘gateway drug’ to supporting it on Earth as well. In the cold dark of space, nuclear energy’s essential properties are made clear: it delivers a lot of power from a small package and it works all the time. Both attributes are as valuable for life on Earth as they are for sustaining robots in deep space.

Space applications are far from being the only nuclear energy concepts with public appeal. Others include thorium, as an alternative and proliferation-resistant fuel for power plants. People love the idea of having a nuclear reactor of their own which is small enough to be installed in their garage, or perhaps a bigger model in the basement of their office building. Fusion is often described in popular media as the perfect energy source, and isn’t it remarkably famous for something that has never even lit a single light bulb?

No matter the inspiration, it is natural for someone who has become interested in the future potential of nuclear energy to start reading about the industry as it is today. While a new fuel source like thorium might be nice, it quickly becomes clear to the curious that uranium is abundant, cheap and already does the job quite nicely. And with reprocessing and recycling, as well as proven fast reactors, we already hold the potential for an inexhaustible supply of energy. After reading about the potential for nuclear to be safer in future, they discover nuclear is already the safest form of energy by a long way. Or, my favourite, when they research nuclear waste they quickly discover that it is actually solid, quite small, and mainly sits there in a concrete box doing precisely nothing.

In short, we can say that having set their sights on a futuristic supply of reliable clean energy, they find it already exists and has been quietly delivering benefits to society, the environment and the economy for decades.

In our own homes, and on the desks in our offices, is another very powerful gateway drug to supporting nuclear energy. It is called Microsoft Excel. Combined with increasing access to detailed data on the energy system, spreadsheets have been motivators for many energy nerds to become grassroots activists, vocal in their support of nuclear power. They have taken it upon themselves to ‘run the numbers’ and see how to decarbonise the energy system. They found that the task is, first of all, enormous, and second, that it cannot readily be done without the full range of tools available.

After these revelations it is no surprise that these new supporters often become more enthusiastic about the benefits of nuclear energy than the professionals. And along with environmentalists making the same discoveries, the new grassroots supporters are becoming influential in changing the nature of public discourse.

So we should not be too swayed by very serious people of the energy industry, who are concerned with the business as it is today, and who talk down small, unusual or unlikely energy ideas – or indeed small, unusual or unlikely advocates. Those industry executives once wanted to be astronauts too, so forgive them for forgetting or becoming bogged down by the seriousness of everyday work.

We have to remember that it is natural among the vast general public to assume that new things and new methods usually represent an improvement on the old ones and are in general worth a try. This is a bright spot in our negative, complaining and fatalistic society, and it is clear that the ‘thrill of the new’ has been a significant driver in the huge public support for renewable energy. Despite plenty of duds, the hundreds of individual technologies in the renewable and efficiency sectors that promise new ways to provide and use energy have driven public perception like nothing else.

Nuclear batteries, small and advanced reactor concepts, and new, more compact, forms of fusion are all tapping into this positivity: that we can make the changes we need to meet our global challenges through innovation and by pursuing our big ideas.