The era of nuclear power – can we prevent it coming to an end? 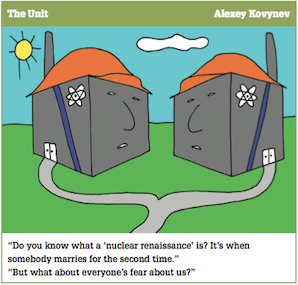 It is now commonly accepted that rapid growth in electricity demand will be an important feature of the world energy scene this century. Increasing levels of urbanisation (particularly but not exclusively in the developing countries), the gradual electrification of transportation and the proliferation of devices that rely on secure power supplies seems to guarantee this. Surely then, there must be a future for any technology that can produce large quantities of power reliably, comparatively cheaply and without notable negative environmental impacts? Advocates of nuclear power claim that it does all of these, yet it is seen as likely to play at best a marginal role in meeting electricity requirements. It is increasingly being seen as an irrelevance.

Nuclear has long been a name that people do not wish to mention within bodies that have anti-nuclear elements, such as the institutions of the European Union. This is spreading. It can be seen as a direct result of the “fear paradigm”, as chronicled in these columns, but pessimism about nuclear’s prospects has now spread to commentators who have previously been at worst agnostic. Poor economic prospects for new-build in the developed world and the financial problems of major suppliers such as Areva and Westinghouse have contributed to this.

A recent neutral commentator summarised the situation as follows. “On the face of it, now should be the moment when nuclear power fulfills the extravagant promises made for it half a century ago. In an age when there is no higher priority than delivering low-carbon energy, the biggest source of that energy in the rich, developed world should be ready to thrive. Yet the industry is in crisis. It looks ever more like a 20th century industrial dinosaur, unloved by investors, the public, and policymakers alike. The crisis could prove terminal.[”,1]

Such comments support successive World Nuclear Industry Status Reports (discussed in NEI October 2016 p8-9) as the conclusions represent what has become the mainstream view. Such reports are now difficult to match with more favourable news and analysis, and certainly question any expansive nuclear vision.

President Trump’s decision to withdraw the USA from the Paris climate change agreement has resulted in a huge amount of media comment and discussion on a “Clean Energy Revolution”, – but one where nuclear power is not mentioned at all or plays an important part but withers away as cheaper and more acceptable renewables take its place. An analysis by the Financial Times showed the number of jobs in the United States created by various energy technologies. It was used to show that solar power employs far more people than the US coal industry, but nuclear was absent from the table.

Similarly, the UK has highlighted how many homes can now be supplied by solar power when the weather allows, or the times when wind power is abundant. But there is a lack of balance in these stories (see July 2016, ‘Renewable power – what about the hype?). A fundamental change in the way energy is produced and distributed is good copy and may wake up readers who are rarely interested in energy matters. It also chimes with personal experience, as many people now have solar panels or can see solar panels or wind turbines in their neighbourhoods. Energy supply suddenly does not seem as remote as when it was all about sheikhs in the Middle East or large power generating stations.

At this point, nuclear advocates could admit defeat and accept that the industry is probably on the way out. The historic move way from fossil fuels may not involve much nuclear (see review of Burn Out by Dieter Helm p34-35). Countries such as South Korea moving against nuclear, as discussed in this column last month, do not help morale.

But the Clean Energy Revolution as depicted today rests on shaky foundations. It assumes that we have seen the end of countries growing rapidly by exploiting fossil fuels (with China the last example) and has a deep belief in technological developments to counter the weaknesses of today’s renewables. Economics will surely still be important, and it is unclear if the energy transition is affordable, given that oil and gas may be abundant and cheap. Germany may be able to afford the transition, but other countries may not.

The strategy for nuclear believers has to be twofold, based on different time horizons. In the shorter term, today’s reactors in operation have to be defended, as do the programmes for new nuclear build. Secondly, there is a need to work towards a shift that will allow nuclear technology to play its justified role in the long term. On the basis that renewables backed by storage are unlikely to be able to satisfy the needs of an urbanised and still industrialised world, there is still potentially a big hole that nuclear can fill.

In the shorter perspective, the USA is crucial. The Nuclear Energy Institute is, at last, strengthening its advocacy efforts, realising that nuclear is not only under attack from the usual environmental groups but also from fossil fuel interests.

Pro-nuclear environmental groups such as the Breakthrough Institute and Environmental Progress can usefully contribute to this and are not so hamstrung in pointing out weaknesses in other technologies as are trade associations, which may have members using fossil fuels and renewables. State-level campaigns can be based on all the arguments for nuclear, as not everyone is concerned with the environment, about energy security in adverse weather conditions or is worried about power prices. Finding out what does concern people is an important first stage, followed by making the suggestion that nuclear can help ameliorate it. Younger people are very important in this as they have fewer preconceived ideas about nuclear (and probably about the relative merits of other energy technologies).

Without success in the short term, there is unlikely to be a long term, so countries such as France will also be important. The plan to reduce France’s supply to 50% nuclear is so far unclear. But without the cheap shale gas of North America, the economic case for investing heavily in today’s reactors to allow them to operate for much longer still looks favourable.

Switzerland’s recent referendum has been unfairly represented as supporting a nuclear phaseout but merely puts a moratorium on new reactor construction. The larger current units can operate as long as they are technically and economically able.

For the longer term, however, nuclear cannot survive without a shift away from the fear which still surrounds it. Salesmen always say that one area they avoid at all costs is questioning in any way a potential client’s religion. Yet traditional nuclear public acceptance work, with lots of facts and figures, does just that. It took a long time to convince people that the Earth is a globe and this is the magnitude of the task that faces nuclear advocates today. People have been told (often inadvertently by the industry itself) for decades that nuclear power is scary and potentially dangerous to their lives. Unless this can be overcome, there is really no future. Technical developments in nuclear are useless without a fundamental shift in how people view it, yet there is still a dangerous hubris amongst the industry’s scientists and engineers.

Experience shows that the factual element has to be aided by the better use of images and symbols. It is important that young people are taught all about radiation, as the knowledge is good for their general health and wellbeing.

In some ways, the nuclear industry infrastructure that supports the fear paradigm may prove even harder to shift. There are many thousands of people around the world working in a variety of organisations whose careers are rooted in nuclear fear. Nuclear safety is an important part of this, where it seems to be forgotten that the reason for nuclear power is merely to produce electricity. Safety is very important, but there is nothing in nuclear’s record of killing or injuring people that suggests it should be any more than this. So concentrate on visions of what the product brings, not any possible issues in getting to it.

Similarly, there are industries devoted to non-proliferation and nuclear security that are inventing and administering solutions for problems which do not exist. Experience demonstrates that weapons proliferation needs major committed state actors and there are fortunately very few of these. International and domestic terrorism seems to be becoming increasingly low tech. Although it is important for security forces to be mindful of the potential risks of misusing nuclear materials, these must be kept in proportion.

The problem is that the nuclear industry has at least tacitly (and often actively) supported this infrastructure and still does so. It has been as consistent as the anti-nuclear forces, who have pumped out the same arguments for many years. The industry has backed these by failing to oppose the Linear No Threshold (LNT) theory of radiation exposure. There are far too many vested interests in maintaining the fear paradigm as it stands today.

The hope from the industry’s viewpoint is that suddenly countries note the weaknesses in renewables, see sense and suddenly start ordering nuclear stations once again. Nuclear has once again become the “last resort” in the energy world, but it was not so many years ago that there was talk of a “nuclear renaissance”. The chance may indeed come again. The International Energy Agency (IEA) has been bad at predicting the rise of renewables, but may be right that the fossil fuel era will end slowly. That may mean that there is a substantial available space for more nuclear. But this time the industry must be preparing the groundwork first today – while it is defending the currently operating plants.