South Africa: can it go further in nuclear? 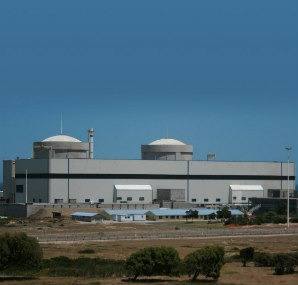 Like Brazil and Argentina, South Africa is another country which had an early start in nuclear, but has so far not progressed beyond two large power reactors. With a large and rapidly growing population this is certainly disappointing. Nevertheless, South Africa has historically had a rather larger stake in nuclear for two reasons. First it has been a major world producer and exporter of natural uranium, in fact one of the largest producers during the 1960s and 1970s. Second, it also once had an active nuclear weapons programme, now happily terminated.

In the 1950s, the Atomic Energy Corporation (AEC) was formed when a significant domestic nuclear industry was planned. The Safari 1 research reactor, a product of the US Atoms for Peace programme, went critical in 1965. Following this, a Uranium Enrichment Corporation (UCOR) was set up, with the aim of establishing South Africa as a major player in the nuclear fuels business, but which also developed the capability to produce nuclear weapons. Much later in the late 1990s, the AEC effectively became the South African Nuclear Energy Corporation (NECSA), the state-owned company responsible for today's involvement in nuclear research and development.

South Africa has historically been a major uranium producer with cumulative production of 160,000 tonnes (out a world total of just over 2.5 million tonnes) since 1945. Remaining reserves today are assessed as more than 200,000 tonnes, so they are still significant on a world scale. Production there has almost wholly been a by-product of gold or copper mining, so its economics depend (to some extent) on the world gold and copper markets. Nuclear Fuels Corporation of South Africa (Nufcor) became established as South Africa's principal uranium company, but now produces only about 600 tonnes of uranium per year from uranium slurries trucked in from various gold mines. With the rise in world uranium prices in 2005-2007, great interest was expressed in expanding local production once again and Uranium One obtained the mining rights for the Dominion Reefs project. Production commenced early in 2007 and was planned to increase to 1500 tonnes per annum by 2011, but costs turned out to be much higher than anticipated. Output was less than 100 tonnes in each of 2007 and 2008 and the mine was closed in October 2008.

Other projects such as Ryst Kuil, Buffelsfontein, Randfontein, Henkries and Karoo have been evaluated, but only Ezulwini has come into production (at very low levels so far). The mine earlier produced more than 6000 tonnes of uranium from the 1960s to 2001; future production depends (as does all production in South Africa) on better uranium prices in the world market. Certainly South Africa is a country where uranium production could step up relatively quickly if the market requires it; the significant local mining finance sector should make it possible to develop viable projects.

Today South Africa is the only African country with operating nuclear power reactors, although several others have run smaller research reactors and have therefore gathered more limited experience in nuclear technology. Power consumption in South Africa has been growing rapidly in recent years as the economy was doing rather well (until recently). Like Brazil, it is regarded as a natural resource-rich economy. It was certainly benefiting from rapid Chinese economic growth and has been added to the BRICS group of rapidly-developing economies. Meeting power demand has, however, become increasingly challenging with demand at times running uncomfortably close to capacity, and some power cuts have been experienced.

About 95% of South Africa's electricity is supplied by the utility Eskom and over 85% of capacity is coal-fired. The twin unit nuclear station at Koeberg contributes 1.8 GWe but generates only about 5% of the country's electricity. The power supply/demand situation will be alleviated by two huge new coal-fired units, but these are obviously not a good solution for a nation which takes its international commitments on the environment very seriously. This dependence on coal as an energy source is reinforced by the coal-to-liquids SASOL plants, which supply about 40% of South Africa's oil-gasoline needs.

Another issue with the dependence on coal is the geographic separation between supply and demand; reserves are concentrated in the northeast of the country, while much of the power load is elsewhere, notably on the coast between Cape Town and Durban. Thus the decision was taken in the mid-1970s to build Koeberg near Cape Town. It was commissioned in the mid-1980s and built by AREVA's predecessor Framatome. Interestingly, Koeberg was the reference plant for Daya Bay in China; both have twin PWRs of 900 MWe and are essentially similar to the first generation PWRs in France (coming on-line from 1977 onwards), which today still provide most of the nuclear power there.

Given the tight power supply/demand situation, there have been (optimistic) projects since 2006 to boost nuclear capacity by up to 20 GWe. Five sites were originally considered, and both AREVA's EPR and Westinghouse AP1000 designs were shortlisted. Both companies established strong local supply chains to back their bids (an essential element as supply chain localisation and creating new jobs is a big issue in a country with high unemployment). At the end of 2008, however, it was announced that Eskom would not proceed with either company as both bids were regarded as too expensive and financing would be very difficult.

This hasn't, however, put paid to future nuclear plans. There is now a plan to boost capacity by up to 10GW through six new large reactors coming online from 2023. It is clear that consideration has spread well beyond AREVA and Westinghouse, with the Russians, Chinese and Koreans all actively involved. Cost is the big issue, but after Fukushima, it has become necessary to offer designs that meet what are regarded as Generation III credentials. Hence the Chinese (both CNNC and CGNPC) have been presenting updated versions of 1000 MW units based on the previous Koeberg French design (although AREVA may claim that there are some lingering intellectual property issues with such proposals). In any case, the national regulator will have to approve both the design and the site. There have been political objections to further nuclear plants (the huge mineworkers union is fearful of coal mining jobs) but the schedule is now for bids to be received in 2014, with the first reactor to be commissioned in 2023. There are three prospective sites under evaluation, all in the Cape region. Although the nuclear plans seem to be in dispute between different ministries and the outcome remains somewhat uncertain, the likely vendors are all lining up.

Up until recently, there was also the Pebble Bed Modular Reactor (PBMR) project in South Africa. This was a high-temperature gas-cooled reactor (HTR) designed for electricity generation but also some possible process heat applications. Eskom had some foreign partners such as Westinghouse in the programme, but it was terminated in September 2010. There was certainly significant interest in the project worldwide, but (in common with most future reactor projects) it proved hard to find investors who would use the technology. The Chinese now have a prototype commercially-scaled PBMR under construction at Shidaowan, and are likely to lead world development of this technology from now on.

Today Eskom procures conversion, enrichment and fuel fabrication services from international suppliers on the basis of competing bids. Historically, however, South Africa has sought self-sufficiency in its fuel cycle. A conversion plant was established and operated in the 1980s and 1990s. Several different enrichment technologies have been pursued. These efforts were at least partly for the nuclear weapons programme in the 1970s but more recently for commercial uses. One was an aerodynamic vortex tube process, but both centrifuge and molecular laser isotope processes were also explored. A laser enrichment programme (rather similar to the US AVLIS programme) was started with support from France, but was cancelled in 1998. There was also a small fuel fabrication plant in the 1980s and 1990s, but current needs are met with imports. There have been more recent plans for a return to conversion, enrichment, fuel fabrication and also reprocessing of used fuel as strategic priorities related to energy security, but these essentially await a larger nuclear power building programme.

Through the Safari 1 research reactor, NECSA is the main supplier of medical radioisotopes in Africa, and can supply up to 25% of the world's molybdenum-99 needs. A replacement for Safari 1 has been mooted, as South Africa wants to retain its important position in the radioisotopes market. NECSA runs a repository for low- and intermediate-level wastes and so far used fuel has been stored at Koeberg. There have been some thoughts of reprocessing spent fuel overseas and utilizing mixed oxide (MOX) fuel. But again, such ideas need a larger nuclear programme to achieve needed economies of scale.
South Africa actually provides a rather good test case of where the future of nuclear really lies. Most forecasting bodies have reference and upper cases for nuclear generating capacity to 2030. Without further reactors in South Africa, even reference cases will be at risk, as it has generally been assumed that at least one further twin unit plant will be built. If the more optimistic projections of nuclear are to be achieved, countries with strong historic experience in nuclear have to build many more reactors. The environmental arguments for nuclear are important in South Africa, but the security of supply case (with good local fossil fuel reserves) may not be so pressing. The future therefore essentially depends on economic factors: can costs of new plants be contained so financing can be secured? Vendors with financial backing will clearly be favoured, but a programme of only two reactors is going to be expensive and unlikely to lead to strong localization of supply. The jobs situation is crucial in South Africa but local industry is not likely to invest in new production facilities to support a reactor programme unless there is a sequence of orders. This may partly be achieved by joining a vendor's international supply chain or a particular reactor type, but strong local demand is necessary first.

South Africa is also a very active democracy; getting all parties to pull together behind a new nuclear programme is certainly difficult. Since all shades of opinion are actively vented, there remains the risk that no workable solution on future power supplies can be agreed. That could lead to insufficient investments in supply. The simple answer of building more coal plants has sufficed for now, but it doesn't offer a reasonable or viable long-term solution.