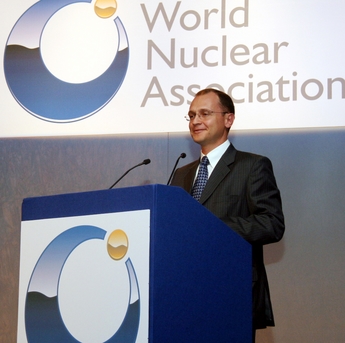 Financing has been approved for the construction of two new nuclear units in Russia every year starting from 2007, according to Sergei Kiriyenko, the head of Russia’s Federal Atomic Energy Agency (Rosatom).

On many previous occasions Russia has predicted significant nuclear growth, but the reality has rarely, if ever, turned out as envisaged. Now, with Kiriyenko at the helm, there is someone with the political experience and authority to make things happen. Born in 1962, Kiriyenko has moved rapidly through the ranks of government. By the end of 1997, the then president Boris Yeltsin appointed him fuel and power industry minister. A year later, in August 1998, after becoming chairman of the government, the entire cabinet was dismissed. In December of that year Kiriyenko became head of the new Russian Conservative party Novaya Sila. One year later, he was elected to the State Duma of the Russian Federation as leader of the Right Force Alliance (Soyuz Pravikh Sil). Since May 2001, Kiriyenko has served as chairman of the State Committee on Chemical Disarmament, and on 15 November 2005 he was appointed to the position of director of Rosatom.

Speaking at the 31st Annual Symposium of the World Nuclear Association (WNA), held in London, UK on 6-8 September 2006, Kiriyenko said the plan for two units a year is the country’s minimum growth scenario. At this level the 16% nuclear share of total electricity generation in the country would be preserved.

“Another scenario envisages the increase of the nuclear share up to 22%,” he said. To achieve this, Russia would need to construct three units per year from 2010 onwards. The government must make a decision on whether to commit to this programme by 2008. “The third scenario envisages a large-scale replacement of natural gas and electricity generation. Following this scenario we should make a decision by 2013 and, starting from 2015, we should construct four new power plants every year. That would allow us to have 25-30% of nuclear by the year 2030.”

Confirming that the decision was made to budget for the minimum scenario, Kiriyenko said that nuclear is uncompetitive against gas, so long as the price for gas remains in the $40/1000m3 region. “But as long as the price for natural gas goes beyond $80/1000m3 the development of nuclear will be very competitive. For these reasons, before the natural gas market is liberalised the government has decided to provide financial support from 2010 to 2015. And from 2015 further development should be purely based on marketplace mechanisms.”

The nuclear units that would be in this programme would be VVERs “of 1200-1500MWe capacity.” Alongside this programme, Russia is committed to other types of reactor: FBRs (“to close up the fuel cycle”); small and medium sized reactors; and high temperature gas cooled reactor (HTGR) development. These projects include:

With regard to the HTGR project, Kiriyenko said: “We consider that the main asset of this reactor is the burnup of long-lived actinides and the possibility of generating hydrogen.”

In his speech to the symposium, Kiriyenko highlighted the other major changes to the nuclear industry in Russia, which include: the separation of the military and civilian nuclear sectors; the creation of a vertically integrated fuel cycle company (from mining to enrichment and fuel fabrication) within the civilian sector; joint uranium mining projects with foreign partners; and the establishment of an international centre for uranium enrichment.

On this last point, Kiriyenko went into some detail. Russia’s answer to the problem of expanding the worldwide growth of nuclear power while reducing the proliferation threat is to set up an international enrichment centre – a similar solution has been proposed by the USA in its Global Nuclear Energy Partnership initiative. “Newly-emerged nuclear states would get their supplies of low enriched uranium in return for the rejection to develop military programmes,” Kiriyenko said, noting that participating countries would “have no access to enrichment technology.” He added: “We are ready to provide the facilities for launching operation of such a programme in Russia by the end of this year.”