Nuclear power – is there another blueprint? 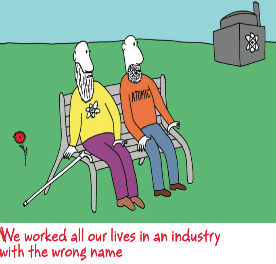 There is a sharp increase in the number of reactors entering operation today, but will this continue? In his final column, Steve Kidd, argues that despite barriers to be overcome, he is optimistic for the future of nuclear power in the longer term.

IN MY PREVIOUS THREE ARTICLES, I have argued that there remains a viable position for nuclear power in 21st century energy supply, that understanding of radiation and a reformed regulatory regime are key to this, and that the institutional setup of the nuclear sector remains on 1950s lines and constitutes a barrier to understanding and reform.

The industry’s goal for the future, represented by the “Harmony” programme promoted by the World Nuclear Association, centres on the strong environmental case for nuclear and overcoming barriers to achieving more reactor construction. Nuclear power and renewable energy options (including hydropower) then save the world from climatic disaster.

The current upward spike in reactor commissioning certainly looks impressive (at least compared with the recent past) but there are few signs that here will be a further uplift in the 2020s. What we see today is largely the result of rapid growth in the Chinese industry, which has now seemingly ended.

If the world is to return to commissioning new reactors at the peak level of the past (40 per year), it is unlikely to happen without North America, Europe and Asia all making a significant contribution.

The big battle in the USA is keeping operating reactors going in fragile economic circumstances. The prospect of lots of new US reactors seems many years away and unlikely to happen for environmental reasons, given the lack of belief in the importance of climate change.

In Europe, by contrast, it is accepted that the environment is a huge issue but nuclear is widely ruled out as a solution. Both the general public and their political representatives seem to believe that wind and solar power (plus storage) will solve climate change on their own.

In Asia, the sharp downturn in Chinese interest in nuclear is unlikely to be replaced by India or by a combination of the other populous counties there. It is clear that without a strong lead from the established nuclear countries, a worldwide uplift in reactor construction is not going to happen.

This may be wrong. There is some evidence that the entrenched anti-nuclear opinion amongst the environmental movement is beginning to fade. In the USA, the Union of Concerned Scientists has come out in favour of saving operating reactors, although it has not advocated building lots of new ones. It is going to take a long time, on current evidence, until supporters of renewables accept nuclear battling climate change alongside their favoured options.

Ultimately the hope for nuclear lies in a paradox within Harmony. A major problem is renewables failing to meet their allocated place rather than nuclear. There is evidence that their intermittency produces acute problems for power grids once penetration rises, to the extent that their main contribution is to lock in continued use of fossil fuels, principally natural gas. In many countries, they may be simply fuel-saving devices for gas generating stations, when they operate. So they are overall of little use to the environment. At least the history of nuclear power demonstrates that 20% and above of many countries’ power needs can be met in this way. The renewables bubble may burst and the need for a lot more nuclear accepted.

In any case, the Harmony vision is flawed for two other reasons. Firstly, fundamental energy transitions just have not happened this way. The concept of teams of clever people getting together and developing energy scenarios that lead to nicely balanced solutions for the world is a fine one, but unreal. Various energy options will rise and fall according to their merits, but it will be not be part of some master plan.

This leads to the second weakness: that many people do not have climate change at the top of their list of energy priorities. Especially when they see the well-off in the developed world installing heavily subsidized solar power (with little net environmental benefit) and then denying them energy solutions which could help. Indeed, air pollution is a bigger problem that needs urgent solutions, with climate change of lesser immediate concern.

This suggests that putting too many eggs in the climate change basket is a mistake for nuclear. Nuclear’s main merit is the ability to produce huge quantities of power from relatively small inputs of labour and materials, with very little overall environmental disturbance. It ought to be able to achieve this economically too, under the right conditions.

It is possible that in 20 or 30 years a lot more nuclear power may be required. A big hole in the energy market will open up for technologies with particular characteristics and nuclear could fill this. In the meantime, some reactors will close and some will be commissioned, but the period of “marking time” for the industry may persist for longer. So, the need is to be ready when called upon.

What can the industry do today to make this happen more quickly or at least allow things to be in the best shape when it does? Two things stand out here: doing a lot more to transition away from the fear paradigm that bedevils the nuclear sector; and adopting a much harder communications strategy based on increased confidence.

I have regularly written about the importance of the fear paradigm and how to overcome it. There is a general acceptance that the main barrier to expansion of nuclear power is that most people are afraid of it but there is too little attention paid to overcoming it. One view is that it is this is something that will die out, as the world moves further away from Cold War weapons hysteria and from prominent accidents such as Chernobyl and Fukushima. New generations, inspired by anything that can avert climate change, may begin to accept or even endorse nuclear energy.

This is unlikely. While even the industry accepts that even small incremental doses of radiation are potentially dangerous, l cannot see that it has a future. Accidents will always happen (particularly if there are more reactors) and the threat of widespread evacuation of innocent people remains. For any energy technology to be acceptable this century, these have to be ruled out. This can only happen with fundamental changes in the international radiological protection system, so that reasonable agreed thresholds are established for allowable radiation exposures. Without this, any future accident is likely to result in the same level of chaos as Fukushima, and this is unacceptable.

The general view that nuclear is dangerous and people should be fearful of it is promoted by the industry through its failure to try to overcome the Linear No Threshold (LNT) theory that underlies today’s regulations. Neither people as a whole nor United Nations bodies are irrational for opposing nuclear. They do so because the industry itself says that they should be fearful. Faulty thinking about radiation is entrenched in the industry’s people, its institutions and the governments who are watching and listening. Switching to a new paradigm will be very difficult and could take 20-30 years. But this is the time horizon we are talking about – nuclear has to be ready to take its rightful place.

The fear paradigm is the root cause of the slowdown of the Chinese nuclear programme, the economic issues of nuclear plants in the USA and elsewhere and the nuclear waste ‘problem’.. Making a proper attempt to overcome it has to start with the radiation issue but once this happens, the industry can have a much bolder and forceful communications strategy.

The problem with a communications strategy where the industry effectively admits that it is dangerous is that it has to be defensive. The industry is essentially indefensible and what comes out will be weak and useless. Experts say, “avoid talking about safety”, but this is impossible if the technology makes people fearful and all information makes this a completely rational view. Safety has to be discussed all the time – but to no good effect. The key lies in beginning to work seriously on overcoming the fear paradigm.

There is a huge amount of nonsense that is written and said about nuclear power that is not properly challenged – as it is about renewable energy. A more confident nuclear industry, actively engaged in engineering a paradigm shift, would feel able to address this. When official bodies or research organisations make statements that can be shown to be wrong or misleading, the industry’s representative bodies must say so quickly and forcibly. They must act with the confidence which the anti-nuclear movement has adopted over the years. It is not surprising that many people don’t know that nuclear power has very low carbon emissions when the industry has been shy about having a voice.

Getting people to “unbelieve” most of what they have ever learned about nuclear is a difficult task.

Despite the challenges, I remain optimistic for the future of nuclear power – but very much in the longer term, as indecision seems set in for some time. At some point in this century, there will be a need to turn to nuclear power – maybe under a new name (perhaps fission power). The evidence to date, however, suggests that innovation tends to make nuclear more expensive. I hold out little hope for the small modular reactors (SMRs) unless the fear paradigm is correctly challenged. Beyond these, there are no doubt reactor models perhaps rather different from today’s light water reactors (LWRs) that might make sense.

Fossil fuels are unlikely to escape from the scene as quickly as many people would like, but fission of the atom is a viable alternative. Renewables are not.