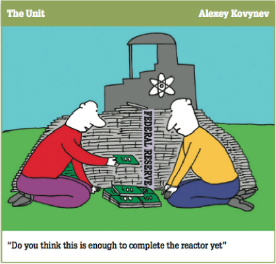 Rising construction costs, low gas prices and increasing renewable generation mean nuclear is facing challenges in the USA at the moment. Is this a long-term issue, and does it transfer to other regions?

There remains a substantial opportunity for nuclear in this century’s energy mix as the disadvantages of renewable energy become increasingly apparent (see my comment from last month). The environmental advantages of nuclear against fossil fuels are an important factor, but the reliability of nuclear generation and its overall contribution to the security of energy supply is arguably more important. The prime weakness is clearly on the economic side. This is something that has been covered extensively in these columns in recent years, but it remains a pertinent issue.

It is interesting to review what those on the anti-nuclear side have to say about economics, as they argue that nuclear is inevitably uneconomic and will always require subsidies to achieve any substantial share in the power mix. A good example is a recent article by Mark Cooper (a research fellow at the Institute for Energy and the Environment at Vermont Law School) in the “Bulletin of the Atomic Scientists”.

Cooper argues very much from the standpoint of nuclear power in the USA, but his analysis can equally be applied to other countries where it has taken hold. Much of the recent news from the USA, notably for new plant construction, has been very bad. He points to superficial similarities between the recent experience with new plants and the period between 1975 and 1985. In both cases, hopes were dashed by poor construction experience and by changes in power markets.

In the recent period, he takes 2008 as the high point of “nuclear renaissance hype”, where the expectation was that South Carolina would be the first of many states to sign contracts for new reactors. Today he claims that the US industry is in “a shambles” with billions of dollars sunk on the two now-abandoned reactors at VC Summer, and only two other reactors under construction, at Vogtle in Georgia. The South Carolina reactors were so far behind schedule and over budget that they triggered the bankruptcy of the reactor vendor (Westinghouse), the near-bankruptcy of its corporate parent (Toshiba), and the resignation of the CEO of the utility (Santee Cooper) that owns 45 percent of the project. He points out that there was some evidence as early as 2011, only three years after the contract was signed, that severe problems were emerging. This was then reinforced by an audit (now made public) in 2015 by the engineering firm Bechtel.

Cooper harks back to similar optimism about nuclear power’s economic promise in 1975 and how it subsequently evaporated. In the aftermath of the dramatic escalation of oil prices in the early 1970s following the formation of OPEC, the expectation was that nuclear power would save customers significantly on their power bills. But he points to the February 1985 cover story in Forbes magazine which painted a very different picture. It said “The failure of the US nuclear power programme ranks as the largest managerial disaster in business history, a disaster on a monumental scale. The utility industry has already invested $125 billion in nuclear power, with an additional $140 billion to come before the decade is out, and only the blind, or the biased, can now think that most of the money has been well spent. It is a defeat for the US consumer and the competitiveness of US industry, for the utilities that undertook the programme and for the private enterprise system that made it possible”.

He then points to a dozen factors and trends which he believes render nuclear power, both new and old, inevitably uneconomic. It is worthwhile examining these in turn.

He points out that nuclear construction costs have been escalating, driven by the complexity and demanding nature of the technology, and that this seems to especially be true of the latest designs. He refers to the Westinghouse AP1000 in the USA and China, but it could equally apply to the AREVA EPR in Europe (and China). On this issue, the industry has to plead guilty, although it can point to experience in South Korea and early plants in China where the performance has been much better. It is essential that the problem of escalating construction costs is solved and this is currently attracting a lot of attention. The key seems to be in finding new ways of building reactors (rather than leaping to new technologies) which is what most of the SMR (small modular reactors) projects are all about.

Secondly, Cooper points to the low prices of natural gas today, which make gas plants more economically competitive than other baseload power, namely nuclear and coal. This is a huge factor in the USA, where unconventional gas supplies have swept the market and made even operating nuclear plants, with capital costs fully depreciated, economically marginal. Elsewhere, however, cheap gas is not such a big issue, as low US prices have not been replicated elsewhere. But are low prices here to stay? Relying on gas for baseload could get extremely expensive if prices rise again. Another important gas plant characteristic is their flexibility. Although modern nuclear plants can be adapted to load follow, this is neither technically nor economically ideal. If power systems require flexibility, nuclear may miss out.

Thirdly, Cooper makes the point that wind and solar power have been declining in cost thanks to technological improvements. To the extent that renewable energy options can be said to compete with nuclear, this makes some of the proposed nuclear plants, notably in the UK, look expensive. On the other hand, the intermittency of renewables means that they supplement, rather than compete with, conventional sources. Providing the necessary backup power for when wind and solar are not operating must be added into the economic assessment, which can get increasingly complex as the share of renewables increases.

Other factors that Cooper mentions are less useful in explaining nuclear’s economic problem. One of his dozen factors is that because of increasing efficiency, demand for electricity in the US is not growing as quickly as it did in the past. Although this cuts the requirement for nuclear (and other generation sources), it does not have a direct link to nuclear economics. In other parts of the world electricity demand is still rising rapidly, something that is obviously favourable for new nuclear. If there is a lot more demand, it may be possible to build a series of standardised nuclear plants, which could confer superior economics.

He also mentions that individual households, communities and businesses are increasingly able to supply their own energy with solar panels and batteries. This may be a factor in particular areas in the industrialised world and developing countries, but this distributed generation is a long way from becoming dominant. It is happening, but slowly, and cannot yet be taken as a factor that makes nuclear economics much more difficult.

Another of his factors is the end of the concept of baseload power. While it is true that power companies are increasingly able to manage and integrate demand and supply, due to advances in communications and advanced control technologies, there is still a requirement for power generation that runs 24/7. Nuclear fits this perfectly, with predictable outages for refuelling. Integrating intermittent renewables can be a big challenge. We are only now learning to cope with this, and it is clear that it needs huge investment in power transmission lines and storage. Cooper quotes a paper that suggests that integrating, coordinating, and managing supply and demand can allow a reduction in total system size of 15 to 20 percent, but this is an example from California, which arguably has very favourable characteristics.

He is also far too optimistic about energy storage. In general, batteries powered by renewable energy cannot be said to offer an affordable way to provide electricity during hours of peak demand in most markets. If storage can be improved and made cheaper, nuclear will arguably suffer. But this seems some way in the future.

While Cooper is right in saying that the average age of reactors in operation is rising, he is not necessarily correct saying that units cannot cover their costs because they need more maintenance, repair and replacement of parts. In areas of the USA with cheap gas, investing substantial sums in operating reactors may have become uneconomic, but generally, around the world this is not the case.

EDF in France is preparing to spend US$50 billion on uprating its reactors for operation beyond 40 years, and this apparently makes economic sense, compared with closing them and replacing them with alternative generation.

Another of his factors is bad management that has resulted in closing ageing reactors. Although a few US reactors were closed early after failed efforts to repair them (for example San Onofre and Crystal River), this has not been a general case. The quality of nuclear plant management is difficult to measure against other industries, but the high capacity factors achieved suggest that it is generally rather good.

Cooper also points to what he calls subsidies throughout the nuclear life cycle as a reminder of nuclear’s struggle to compete in liberalised power markets and a focal point of political struggles at the federal and state levels. He mentions Energy Secretary Rick Perry asking the Federal Energy Regulatory Commission to change electricity pricing to boost compensation for nuclear and coal plants. An argument can, however, be made that today’s power markets do not provide a reasonable payment for reliability in supply and therefore the state is justified in stepping in. This is an argument that is now set to run for some time.

Finally, he mentions difficult, expensive and lengthy cleanups after accidents (such as at Fukushima in Japan). These are sporadic and isolated incidents and are covered by nuclear liability laws. Some argue that they provide a huge implicit subsidy to the industry, but it seems there is no other way of establishing nuclear programmes.

In conclusion, it seems that the first three factors mentioned by Copper, namely rising construction costs, cheap gas and rising renewables, are the crux of the case against nuclear on economic grounds. But cheap gas is only available in a few locations and may not last, while renewables benefit from subsidies that may be withdrawn and have problems integrating into power markets.

So, rising nuclear construction costs are the key to nuclear’s economic problem. If they can be contained, either by building large light water reactors more cheaply or by shifting to new nuclear technologies, nuclear will have a much better chance of achieving more orders.